If you’re a Firefox user then you now have a new version to download, with the popular browser being updated to version 10.

Other than being a nice round number, version 10 brings with it a few minor alterations that are not going to set the pulse racing, unless you have a particular hankering for a ‘forward’ button that hides itself until it has a function?

Other updates include support for full-screen web apps, perfect for games and the like, as well as extension management improvements across the board. With Firefox’s biggest pull being the huge number of extensions that are currently available to it, anything that makes the browser handle them better is going to get the thumbs up from us!

Antialiasing for WebGL is also now implemented, according to the new version’s release notes.

Firefox version 10 also sees the addition of an "Extended Support Release," which allows the enterprise to install Firefox without it updating quite so often as everyone else’s browser. Security updates will be applied as and when they are available, but regular updates will not. The idea here is that support departments do not need to worry about supporting a new version of the browser every six weeks.

That six week update cycle is something which began nine months ago, and that new cycle has seen Mozilla take Firefox from version 4 to the 10 release we’re talking about here. Google’s Chrome also sports a similarly speedy update cycle, with the search giant’s browser currently on something of a market share charge. While both currently have similar shares, Google’s Chrome is without a doubt the one that is very much on an upswing. 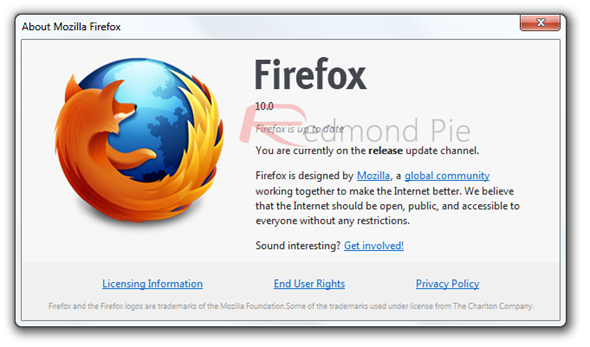 Firefox version 10 will be a silent update for those of you who already have an earlier version installed, or new users can download the app afresh should they so wish.

Use of both Chrome and Firefox is mixed at Redmond Pie Towers, with Google’s offering feeling slightly slicker than our old friend Firefox. We’ll be sure to give this new release a buzz soon though, but do let us know how you find it on Facebook, Twitter or indeed, Google Plus.