Developers and engaged Mac owners alike may be fully expecting a reveal of the next-generation of OS X during WWDC 2016 in June, but that doesn’t mean that work will cease on the current El Capitan platform. To that end, and to show that progress will indeed continue to be made, Apple has officially released OS X 10.11.5 for public download and consumption.

The official availability of the fifth update to OS X El Capitan comes on the back of four prior pre-release beta seeds, and is available for all compatible Macs through the usual update mechanisms. 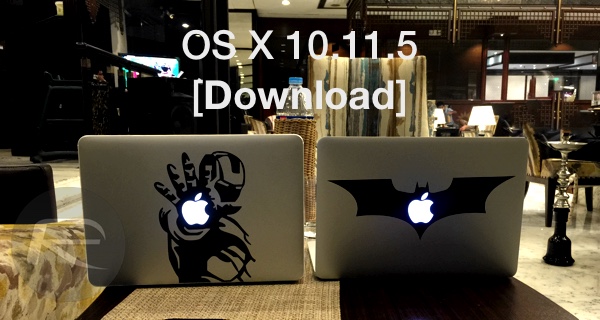 It’s highly likely that Apple will be saving all of its internal consumer-facing gold for the next major version of OS X. In fact, if a number of leaks and hints that have been dropped and discovered turn out to be true, then we may need to be dropping the OS X naming convention altogether in favor of referring to the company’s desktop platform as ‘MacOS‘. Saving that gold for the future of the platform means that OS X 10.11.5 features very little in the form of feature upgrades or functionality enhancements, and like previous releases, seems to focus entirely on making subtle improvements that benefit the user, either directly or indirectly.

OS X 10.11.4, which officially went live immediately after the opening keynote of Apple’s “Let us loop you in” event in March, introduced a number of changes that converged the system a little more with the likes of iOS by introducing things like support for Live Photos in Messages, and additional layers of protection arounds notes created in the stock Apple Notes app. Unfortunately this time around, there’s no such goodness to sink our teeth into, and certainly no abundantly clear outward changes that will directly affect those using OS X El Capitan on either a MacBook or iMac machine.

Still, the fact that user-facing changes aren’t present isn’t always a bad thing. Apple has taken the necessary route of integrating critical bug fixes and security enhancements under-the-hood that will make the whole overarching OS X experience a much better one for all interacting with the platform. The interesting part will be if any keen-eyed developers delve into the system further and find any additional references to the myserteous ‘MacOS’ that we mentioned earlier.

For now, OS X 10.11.5 is live and available to the public, and can be downloaded and installed through the usual update mechanism on the Mac App Store.