The Like button was introduced to Facebook quite a few years ago, and although a few users believed a Dislike button would be the natural next-step, that never actually materialized. Still, following a similar ethos, it turns out Mark Zuckerberg’s company could be planning to add a Want button, which would be aimed towards products, and improve the social network’s advertising prowess.

The Like button has proved hugely successful among frequenters of the world’s most popular online social, and Tom Waddington, the guy behind Cut Out + Keep, has done a little digging into the Facebook JavaScript SDK, and found a Want button has now been added as the XFBML tag "<fb:wants>". As it’s merely at testing stage just now, it isn’t listed on Facebook’s developer site with the other standard plugins such as Like and Comment, and to avoid any abuse, Waddington believes the button will only be available to Open Graph objects marked as products.

Facebook Likes, which then became Pages, have been abused frequently, with various duplicates and Pages becoming available for the most mundane, irrelevant occasions. Hopefully, Zuck’s team will put measures in place so all products are vetted before being given Want privileges – preventing people from "Wanting" celebrities, for example. 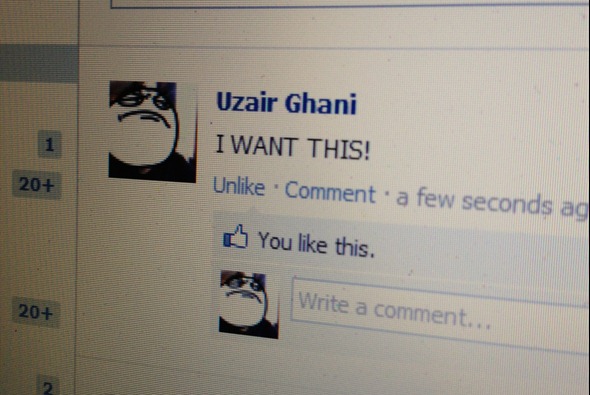 As with the Like button, users need not authorize a third party app in order to "Want" its content, thus the likelihood of one clicking the button is significantly increased. The Like button allows Facebook to learn a great deal about its users, and by also knowing what they want, ads and referral links can easily be pushed toward those who Want a product. The stark difference between a Like and a Want from an advertising point of view, is that when one Likes a product, they may still have no intention of buying it, or already have it, whereas Wanting would be a clear indication of genuine willingness to purchase.

This specific advertising gives social users a foghorn to announce exactly what they want to buy, and offers Facebook the opportunity to push said products in their direction, which would undoubtedly render Facebook’s advertising more valuable. If all goes swimmingly, it could even wind up knocking on the door of the likes of Google AdWords.