It has always been a subject of curiosity as to why Facebook decided to make its Messenger feature a separate entity on mobile devices. The fact the version 1.0 of Facebook Messenger was riddled to the core with bugs certainly didn’t help, but while many had seen the move to separate the two as merely arbitrary or for purpose of vanity, it appears there is, after all, some method to the madness. The Android department of the Facebook Messenger app will soon be releasing an update fairly soon to users in select countries, and intriguingly, it will no longer require users to own an account to log in and get chatting. A direct challenge to the likes of WhatsApp and the traditional SMS app? We think so.

WhatsApp’s cross-platform, free-to-communicate app has proved extremely popular with consumers on a wide variety of platforms. You pay $0.99 / 69p, and so long as you’ve a cellular or Wi-Fi connection, you can send messages, images, videos, and even audio clips to your heart’s content. With many other services – including Apple’s free iMessage service – also floating around, the traditional SMS is under severe threat, and Facebook’s decision to open up its Android app even to those not signed up to the social network will only hammer another nail into the SMS coffin.

It’s a good move on Facebook’s part, and a clear attempt to dethrone and exceed the work of WhatsApp, iMessage, and all the other popular free methods of communication. With such a large user base, it’s in a strong enough position to allow casual use of its messaging service, and with hundreds of millions of people using other services, Mark Zuckerberg’s team will be hoping to make Facebook Messenger the de facto option for every mobile device user.

To begin with, the update will only launch in a handful of countries including India, Australia, Indonesia, Venezuela, and South Africa, but it won’t take long for the service to trickle out to many other parts of the world. An iOS edition will drop at some point in the future, as you might expect, although when that may be is unknown. 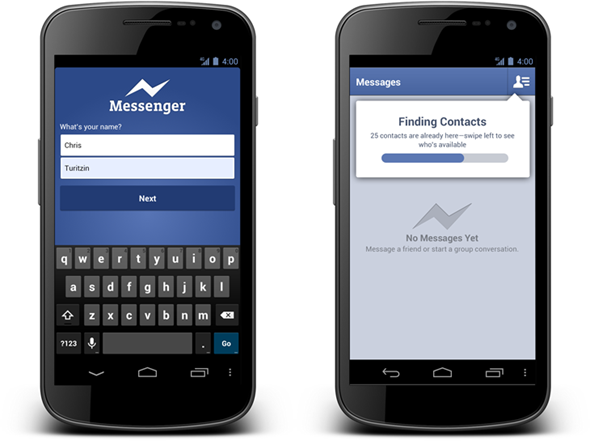 Could Facebook Messenger really become the go-to messenger app for everybody? And is this the first sign of Facebook acquiring WhatsApp and turning it into a part of its own?