It’s a generally accepted fact that first mover advantage exists in all fields of life, including the online world. If you look at the most famous web services and applications today, this indeed seems to be the case. However, there are almost invariably always some exceptions to the general principle, and Facebook happens to be one of those. When today’s social networking giant entered the market, there were already big players like MySpace, Orkut and Hi5 in operation, but Facebook offered something different, continued to improve on it, and thrived with it. Today, the online portal boasts enough active members that had it been a country, it would’ve been one of the largest in the world by population.

One of the key factors attributing to Facebook’s success has been the constant improvements that the web application brought to its interface, feature-set, functionality and performance. Steadily and consistently has Facebook evolved into the most popular social network on the planet. Akin to its web-based service, Facebook has focused on its various apps available across different platforms. Be it BlackBerry, Android, iOS, Windows Phone, or any other operating system that has received a Facebook app, things have definitely improved over time. However, it’s nothing surprising that the prime focus of all these improvements and efforts has been the Cupertino giant’s iOS platform. I remember a couple of years back when I switched from Android to iOS, one of the driving components was the much functional and usable Facebook app for the latter. That’s how things have been even as of late.

Today, Facebook seems to have taken a much-needed step in the right direction with the announcement and release of version 2.0 of its official Android client. Being distributed through the Google Play Store, Facebook 2.0 for Android is not only faster for browsing photos and navigating through timeline on your smartphone or tablet, but also quicker to launch. Let’s look at the improvements one by one.

For their latest update, Facebook has rebuilt the whole Timeline and notification system, resulting in a much efficient code that launches the app without any delays, displaying information as soon as you tap its icon. The difference in speed is noticeable, and you’ll feel it right after the update. 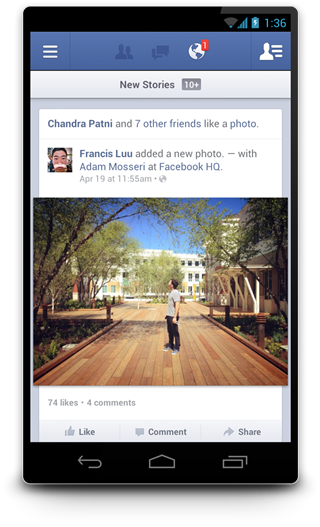 Until now, when you launch the Facebook app for Android, you’d have noticed that the app will first load, and then refresh your timeline, news feed, notifications et al, resulting in a delay (even if not a very significant one). This becomes even more annoying on slower connections. With Facebook 2.0, all of these are continuously updated in the background, so that you’re presented will updated content right after you launch the app. Say goodbye to those update delays! 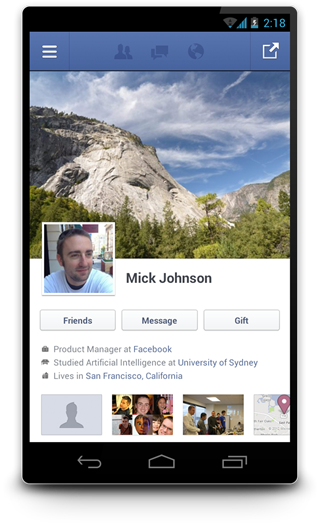 One of the prime functions of Facebook has always been photo sharing, and update 2.0 caters to that specifically on Android. Now, all the photos completely loaded with their thumbnails (thanks to the background updates), so all you need to do is tap a picture to view it instantly. Furthermore, entire albums can be browsed without leaving the news feed itself, much like the Facebook Camera app for iOS. Pretty neat, eh? 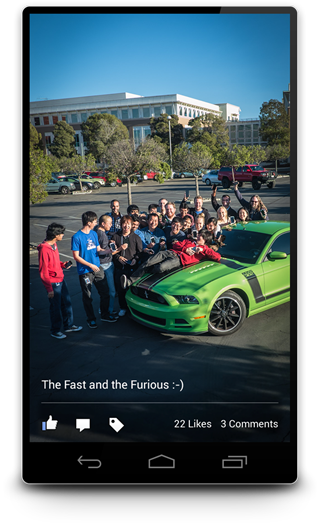 Since this update brings a lot of improvements with background processing, it’s yet to be determined what impact that would have on your Android’s battery life. It’s unlikely that Facebook wouldn’t have been mindful of that when designing this, but time will tell how that has played out. Increased data charges due to background updates might also be a concern.

Facebook 2.0 has started rolling out in the Google Play Store, and if you have the app installed, you might have received the update notification already. Otherwise, head over to the play store link below to install the new and improved Facebook app for your Android smartphone or tablet.