Facebook Changes Privacy Settings, Enables Facial Recognition For Tagging Photos By Default. Here’s How To Turn It Off

Facebook always seems to be in the middle of a debilitating privacy row, and as Mashable reports the social networking site could be steaming headlong into another with its new facial recognition system.

The new system, which set alarm bells ringing for many privacy-conscious people when it was fist mooted back in December, offers people’s photos and suggests the names of friends they should be tagged as.

The feature basically means that whenever you’re offered the chance to tag groups of your friends in an album, Facebook will use its facial recognition technology to group similar faces together and automatically suggest the friend you should tag them with. 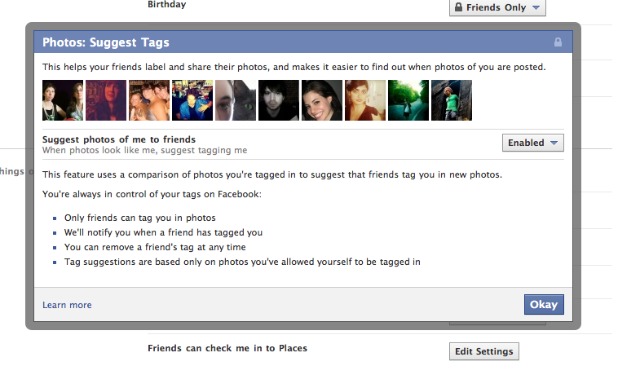 Facebook’s facial recognition feature has been rolling out across Europe for the last few months with the default setting being for the controversial system to be turned on.

Despite all Facebook’s privacy snafus, the company does at least offer an option to turn off settings should users feel their privacy is being compromised, and facial recognition is no different.

So how do you turn facial recognition off? Thankfully, it’s all rather simple which hasn’t always been the case.

While we can’t deny that the option to disable facial recognition is a welcome one, we can’t help but wonder why Facebook keeps finding itself in these situations with regards to privacy though we also wonder if people don’t have something of an axe to grind when it comes to Mark Zuckerberg and Co.

The European Union’s data-protection regulators are already looking into the privacy ramifications of Facebook’s latest move to catalogue us all.