Real Racing 2 is regarded as the best racing simulation on iOS devices and, if today’s update from its developers Firemint is anything to go by, RR2 is set to get even better! 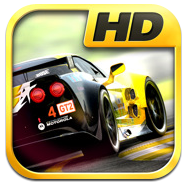 Firemint updated their blog to inform fans that when iOS 5 releases this fall, their game will make use of Apple’s updated AirPlay tech for full screen wireless gaming.

AirPlay was previously limited to just photos and video but Apple announced this past Monday at WWDC that iPad 2s with iOS 5 will have the ability to mirror the entire screen wirelessly to an HDTV that is connected with an Apple TV… using AirPlay.

This updated form of AirPlay, is nothing less than a game-changer.

There is a distinct similarity now between Apple’s iPad 2 and Nintendo’s recently announced Wii U console. While, of course, Wii U is a more traditional home console and caters to the more seasoned gamers, its concept of having a six-inch touch screen that wirelessly works with the console is exactly how things will work with games supporting wireless mirroring on iOS 5.

And there are some marked advantages of the iPad 2 over the Wii U for casual gamers. Things like a larger, capacitive touchscreen versus a resistive one and thousands-upon-thousands of cheap games (most run for under 10$) already. The iPad 2 also isn’t tethered to a console; the console is the iPad 2 itself.

HOW IT WILL WORK 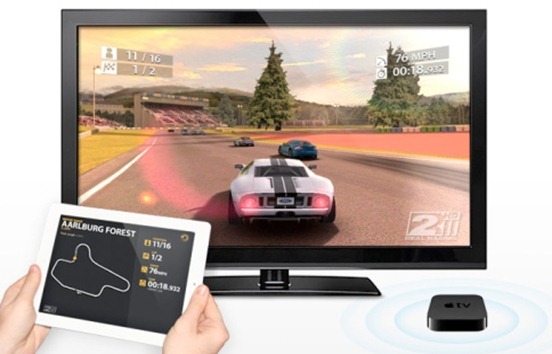 With Apple’s announcement of iOS 5 and AirPlay mirroring at WWDC 2011, Firemint is thrilled to report that, come the new OS, Real Racing 2 HD will be the first title to support full screen wireless gaming over AirPlay!

This isn’t just mirroring – you’ll be able to play Real Racing 2 HD on your big screen without a cable, while your iPad 2 displays racing telemetry in real-time. No black borders, no wires – just iOS racing at its finest.

Once it is set up, Real Racing 2 HD will use the iPad 2’s screen as a display for real-time racing telemetry while the HDTV will be used for displaying the game’s actual racing action which you can control by using iPad 2 as a steering wheel.

We have one qualm about this though. In the Introducing iOS 5 video, the AirPlay mirroring feature seems to have a slight lag between when you interact with the screen and when the TV shows its result. This may be an issue for games like Real Racing where timing is key. I do hope Firemint knows about this.

It’s all very exciting, you see. The iPad is now emerging as an actual competitor to portable and home console devices. It’s no quad-core PlayStation Vita, but it certainly is a viable choice for casual gamers.