Facebook Camera App And What It Means For Instagram’s Future

In what comes off as a rather unusual and quirky move, Facebook has just released Facebook Camera for iOS. Aptly named, the app is essentially a standalone app that lets you manage and post photos on the social networking service. There’s more to it than that, though; the service also offers 14 filters for you to "decorate" your photos with. In many ways, the app offers functionality that’s very similar to that one prominent photo-sharing company they acquired last month for $1 billion. Now, I proceed, I just want to give Facebook credit for creating such a pleasantly-designed app; coming from a company that’s notorious for terrible mobile apps, this is quite something.

Moving on. Their intent to release this app post-acquisition definitely adds a degree of complexity to analyzing their intentions of purchasing Instagram to begin with. I mean, just, why? What are their intents? Will they eventually axe Instagram by merging it with their proprietary Facebook Camera app?

While certainly confusing, it’s also understandable as to why Facebook may want to release its own independent, more tailored-to-their-service app while letting Instagram be Instagram. Surely, the diehard users of Instagram wouldn’t be too pleased if all of the functionality in Facebook Camera was tacked on to Instagram. Or worse, if sharing on Twitter and the Instagram social network itself were obscured as a result of this.

So of course, they wouldn’t do that. After quite a bit of pondering, here’s my take on it: Photo sharing is a pretty big part of social networking, and with the rise of Instagram, it’s likely that Facebook felt that they were falling behind in this space. With Instagram at a point where it was quite established, but still at a lack of a proper revenue stream and still with potential to continue growing, they felt that it was the right time to jump and acquire the company. However, they didn’t do so to completely transform and change an already solid app; they wanted to own a lucrative property in the photo-sharing space, and perhaps get their hands on some of the talent behind the company.

While it’s initially hard to – it’s much easier to view Facebook Camera and Instagram as a case of fragmentation – I think I’m slowly coming to terms with the idea that Facebook may want both of these apps to coexist independently of each other. Again, rather than molest Instagram with plenty of Facebook bloat, it definitely makes more sense to build an independent app for what they want. And now, from a perception point of view, Facebook are seen as a major player in the photo sharing space.

So, will Facebook axe Instagram entirely and replace it with this app in time? Unlikely. But, will the apps cross-pollinate, perhaps sharing filters, or allowing users of Facebook Camera to post photos to Instagram’s network? Far more likely. 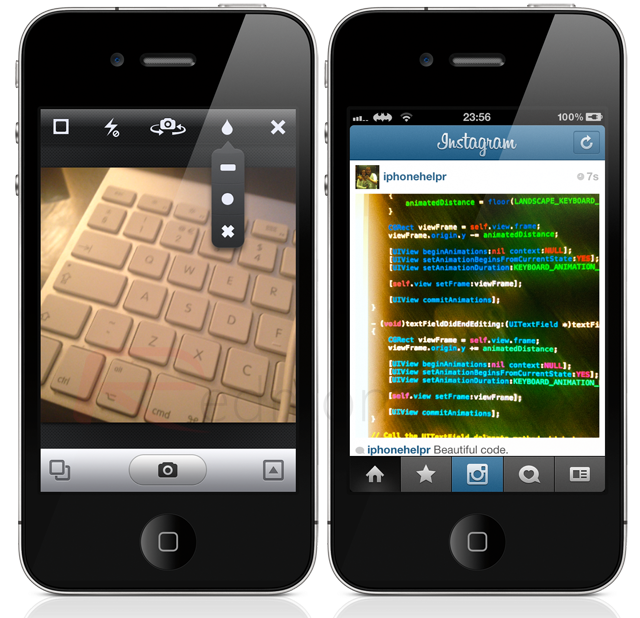