Facebook users have long been able to embed media on their profile pages through statuses and wall posts, but now the possibility has been added to embed photos, videos and web links through its comment feature.

As the tweet states, have you used the new commenting? Give it a try on one of your friends’ statuses. It functions just as well as it has done in statuses, wall posts etc. Here is a screenshot of a simple YouTube link posted as a comment in someone’s Facebook status: 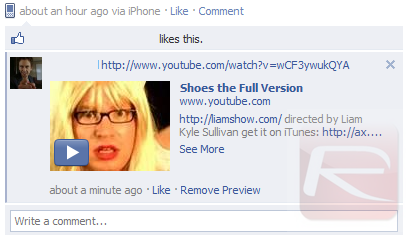 As you can see, if you don’t feel like clogging someone’s status up with what is essentially spam, you can remove the preview to keep things tidy.

With Google+ causing somewhat of a stir in the social networking scene, the onus is certainly on Facebook to maintain it’s place as the world’s number one. The alternative platform, though still just a mere baby at invite-only beta stage, has already amassed a reported 18 million users in its first three weeks – impressive statistics no matter which way you look at it.

With well over half a million users joining daily, one suspects that once Google+ officially launches and Google begins to flex its marketing prowess, it will more than likely attract millions of users daily. Tech commentators are undoubtedly getting carried away by the Google gravy train, but the numbers do not lie, and it’s looking as though we potentially have a real duel on our hands

The battle is Facebook’s to lose, and it will be interesting to see if Mark Zuckerberg’s creation will be able to handle the pressure. The latest version of its official iPhone app has been disastrous, (I can vouch), suffering from many bugs and crashes, and causing tens of thousands of displeased users to complain and post one-star ratings through Apple’s App Store – the lowest possible rating. Not such a great reading from a company which said mobile was it’s “top priority” for 2011.

With half of iPhone users currently using Facebook’s free app, there is no margin for huge errors such as these. An update is supposedly due very soon (indeed, some time today) to amend the recent bugs if you have experienced them.