The photos application that comes as stock on Apple iOS devices is probably one of my favorite apps on my iPhone and iPad. I know, it seems like a bizarre statement to make considering the amount of amazingly innovative and beautiful applications that exist amongst the 543,000 on the App Store. However, the simple nature of Photos App, mixed with its functionality and deep integration into the operating system has made me fall in love with it.

But, as we all know, falling in love is easy, it is human nature after all, but the difficult part is remaining in love. I am now onto my fourth iPhone and second iPad and there is a consistent, niggling little gripe that I have with the Photos App that could have produced a ripple in our otherwise perfect relationship. I am far from being an accomplished photographer, but I do love taking photographs. Whether it is a shot of a loved one (usually my dog), or a quick snap of a shop window when I am out and about, my Photos App is full of a random collection of images. Imagine my distress when I was out of the country, trying to email some photographs home and my beloved Photos Application let me down by refusing to allow more than five images to be selected for emailing.

Prior to this, I had never known there was a limit to how many photographs you could send to the Email App from within Photos. I guess it is one of those limitations that you never come across until you come across it, and then you are totally perplexed by its existence. iOS 4 and 5 brought some great improvements to the application, with the ability to create individual user albums from your camera roll and actually seeing a world map which shows the locations of where photographs were taken thanks to a clever geotag embedded in the photograph at the time of capture.

Thankfully, Cydia has come to the rescue again with the recently released and aptly named ‘Mail More Photos’ tweak. An iOS developer known as ‘noppers’ has entered the Cydia store with an initial 1.1 release of his tweak, released onto the ModMyi repository. So often is the case in the jailbreak community, a developer comes across an issue which causes them distress and they decided to ‘fix’ it, which I like to think is the case in this instance.

The Mail More Photos tweak hooks directly into the Photos App and effectively allows an infinite number of photographs to be selected and shared via email. A very nice extra with the tweak is the real time update it performs on the navigation bar of the application when the user is selecting photographs to share. The nav bar is actually updated to show how many photographs are selected and what the total size is in terms of megabytes, which is extremely useful if you are intending to email the images to an email address with an inbox receiving limit. 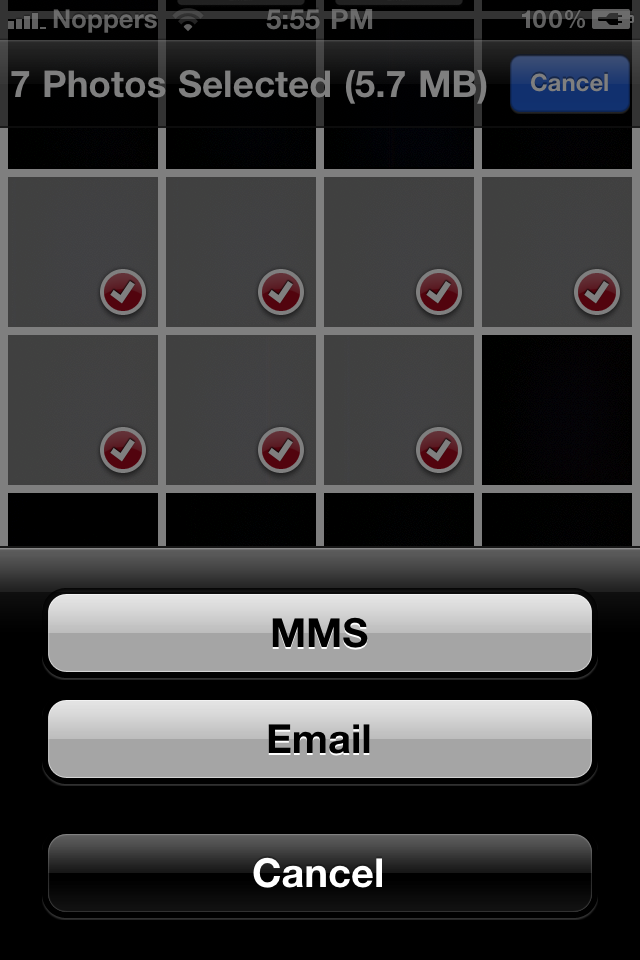 Mail My Photos is available now for $0.99 on the ModMyI repository within Cydia and requires a device running iOS 4 or above.