Download Portal for PC & Mac for Free Via Steam! Limited Time Only

Popular first person puzzle-platform video game Portal has been made available for free (yes, legally) for PCs and Macs. This is a limited time offer, so if you haven’t played it yet, we highly, highly recommend that you go download it now. 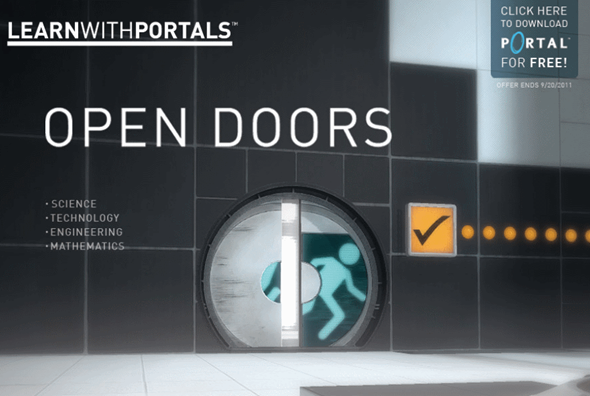 Valve Corporation – the developers of Portal – have decided to give the game away for free under their Learn with Portals program which aims to capture the imaginations of students in order to help make teaching them science, technology, engineering and math easier and more fun.

While we aren’t clear how exactly a video game like Portal would help make teaching said subjects easier, it appears that Portal has tools for creating custom test chambers and making other modifications to the gameplay which apparently Valve thinks helps students.

Whether playing around with Portal helps students or not doesn’t matter much at the moment, since the more important thing is that Portal is available for free.

From the Learn with Portals site:

When we heard the buzz surrounding the new role video games are playing in education, we had to throw our hat in the ring. Today, innovative educators are finding ways to incorporate Portal™ and Portal 2 into their classrooms—helping teach physics and critical-thinking skills. It’s eye-opening to see how video games can be used in amazing and unexpected ways to help educate our next generation.

One of the biggest challenges in teaching science, technology, engineering, and math is capturing the students’ imaginations long enough for them to see all of the possibilities that lie ahead.

Using interactive tools like the Portal series to draw them in makes physics, math, logic, spatial reasoning, probability, and problem-solving interesting, cool, and fun which gets us one step closer to our goal—engaged, thoughtful kids!

System requirements for Portal are quite lax, all you need is at least a 1.7GHz processor, 512MB RAM and DirectX 9 video card along with an internet connection to be able to play Portal on your PC.

If you’re interested – which we’re sure you are – Portal can be downloaded for free after installing Valve’s Steam client from the link below. The offer will last till September 20th, so get it while it’s hot!