Apple has unexpectedly released new builds of OS X Lion 10.7.2, the iCloud add-on for OS X Lion and iPhoto 9.2, which are now all available to registered Apple developers. Similarly to previous builds, the single goal of these seeds is to allow developers to test out iCloud ahead of its official release.

OS X Lion 10.7.2 is the second update for the newly released OS X Lion. Unlike the 10.7.1 update that was just released, which simply included bug fixes and performance enhancements, 10.7.2 is simply aimed at adding iCloud support to OS X Lion. All registered Apple developers who have installed previous builds of OS X Lion are advised to run the included reversioner beforehand before installing the new build of 10.7.2 (11C43). In order to fully add iCloud support to OS X Lion, developers must install iCloud for OS X Lion afterwards to add support for all of iCloud’s exclusive features into the operating system.

In addition to system upgrades, Apple has also seeded iPhoto 9.2 Beta 3, an update that also aims at providing integration with iCloud’s features that deal with photography, such as Photo Stream, which allows any user created photo slideshow to be streamed to any Mac or iOS device, all over a wireless network. Before installing this update, keep in mind that it will replace your current version of iPhoto with this one which can have the issues commonly found in pre-release software, therefore it’s recommended that you only apply this update in a testing environment. 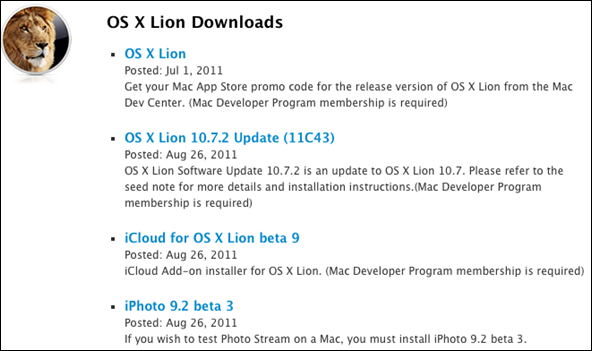 In order to get all of these updates legally, you need to be a registered Apple developer. Luckily, anyone can obtain a developer registration for as little as $99 per year. This subscription won’t only give you access to full versions of Mac OS X and pre-release software, it will also let you download exclusive developer-oriented tools and documentation. While aimed at developers, any Mac enthusiast should be subscribed in order to get the latest from Apple, so why don’t you head to Apple’s developer site and get your subscription?

iCloud is Apple’s new endeavor in the online services business, after the failure of MobileMe and .Mac before it. Indeed, iCloud includes many features designed at keeping both Macs and iOS devices in sync, all built into the apps users have grown to love such as iTunes, iPhoto and Safari. Currently in Beta, iCloud will be available to all customers this fall with everyone’s favorite price tag: free. You can learn more about iCloud here.