Three weeks after Apple unveiled its next major operating system versions, one week after seeding second developer seed of them, and few minutes after iOS 12 public beta 1 seed, Apple has now made first macOS Mojave as well as tvOS 12 public betas available to testers of Apple Beta Software Program portal.

As mentioned earlier, developers have been able to test the aforementioned platforms since earlier this month but now from today onwards, even general public can join in the fun.

As is always the case with beta releases of this nature, it’s important to note that both macOS Mojave as well as tvOS 12 are super early beta builds and as such may not be recommended for use on daily production machines/primary devices no matter what. They are bugs to be expected just about everywhere so install only on a device which doesn’t have any of your important data on it.

As for what is new in macOS Mojave and tvOS 12, we recommend checking out our separate posts on the features here, and here. 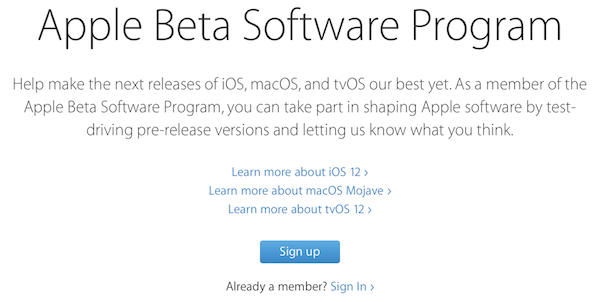 In order to download and install the aforementioned betas, you will need to be a member of Apple Beta Software Program portal. To do this, head over to beta.apple.com to sign up and then get started with these new betas.