Microsoft’s Kinect was originally launched as a novel way of playing games which took the motion control gaming of the Nintendo Wii and made it truly controller-free. Using a camera and microphone, the Kinect changed the way we interact with our Xbox 360s, though whether much more than a novelty or a gimmick remains to be seen.

It didn’t take long for clever folks to take the Kinect and repurpose it for all kinds of cool things though, and the Kinect for Windows project was born. Backed by Microsoft and using a version of the Kinect hardware that is not restricted in similar ways to the Xbox 360 version, the project has been the catalyst for all kinds of weird and wonderful uses of a Kinect. 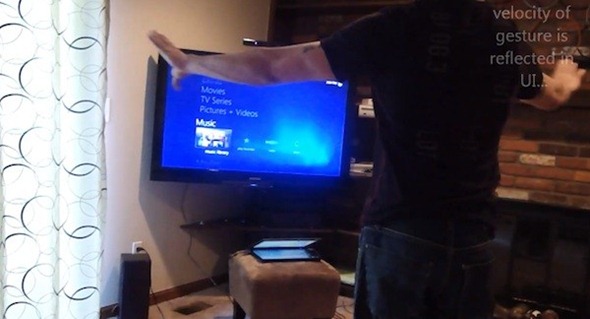 The app itself can be downloaded now in exchange for less than $7, which is well worth the outlay just to encourage further development.

Gestures can be used to control all facets of the software, with real Minority Report-style actions causing menus to whizz by and options to be selected. The embedded video should give you an idea of what is possible, so that’s well worth a watch.

The app even has filters to ensure that any audio coming from the played media does not activate the Kinect itself, which is an issue that some have noted with the Xbox 360 version of Kinect although we haven’t run into such problems ourselves.

We can’t help but be impressed with what people are learning to do with the Kinect, and it really is a sign that we are living in the future. Anyone who has seen Minority Report will have wished that we could interact with computers in the way Tom Cruise does in the movie, but now we really can. Whether you think the Kinect is a fad in its gaming implementation or not, you really do have to marvel at how it could change the way we interact with interfaces moving forward. With Kinect and touch-based hardware coming of age, the humble mouse and keyboard may finally die a death.

That will definitely happen before the Xbox doesn’t need a control pad!