Apple has just taken the opportunity to release iOS 8.4.1 beta 2 download for iPhone, iPad and iPod touch to those fortunate enough to be registered on the Apple Developer Program. The second beta seed comes two weeks after the initial beta and continues the progression of iOS after the final public release of iOS 8.4 was thrust into the world containing and upgraded Music app with immediate access to Apple Music.

As is usually the case with these last minute iOS beta seeds, what has actually changed within the operating system in the last two weeks remains largely unknown at the present time. Apple seems to go through phases of sometimes pushing out updates accompanied by extremely detailed and verbose changelogs, and then deciding to keep entirely silent on the intricacies of the build. 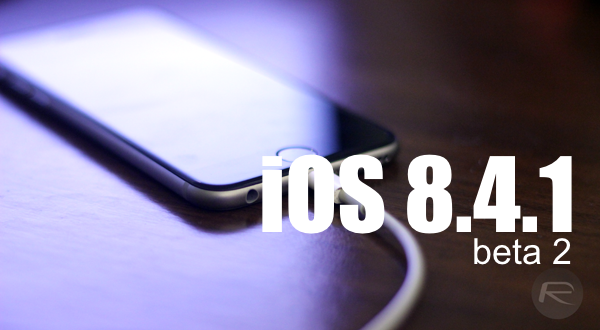 With that said, considering the the first beta of iOS 8.4.1 was seeded two weeks ago it’s almost a given that this latest developer build will be packed full of important bug fixes and performance enhancements that have been considered crucial based on initial feedback from the first seed. This latest offering that’s now available through OTA update system and the Developer Program portal comes with build number 12H318.

iOS 8.4.1 finds itself in a rather strange position. Many analysts and technology insiders believed that the public release of iOS 8.4 would have been the last version available for iOS 8 considering iOS 9 is currently in an advanced state of development with both developers and the general public providing continuous feedback. However, it seems that although iOS 9 is likely to see a fall release with the iPhone 6s and 6s Plus, Apple is not yet ready to turn its back on iOS 8 and is continuing to engage developers in an attempt to fine tune the current iOS experience as much as possible.

As far as jailbreak is concerned, rumor has it that Apple has already patched TaiG’s iOS 8.4 exploits with beta 1 of 8.4.1, though there is no 100% confirmation of that as yet.

iOS 8.4.1 beta 2 is available to all members who are enrolled in the Apple Developer Program. Those who are interested in getting ahold of it and putting it on a test device can grab the download from the Apple Developer Center. Of course, if you happen to be already running the initial 8.4.1 beta on any iPhone, iPad or iPod touch device then the second beta should start showing up as an over-the-air (OTA) update at any time now.