Over the last few months, we’ve seen several pre-release seeds of iOS 5 but no indication on when we’d finally see the final version, and without any surprise, today at their media event, Apple has seeded the final Gold Master candidate of iOS 5 for the iPhone, iPad and iPod touch. 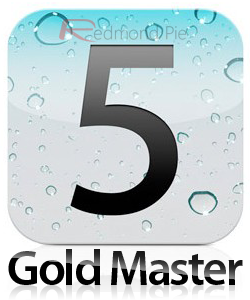 After a mind boggling seven beta releases of iOS 5, Apple is finally done polishing iOS 5 to the point where it is ready for prime time consumption. iOS 5 Gold Master Candidate will likely indeed be the system’s final release unless any serious problems or bugs are found, which would require another GM candidate to be issued shortly after. Yet, Apple has a good track record of getting it right the first time, therefore we can say with some certitude that the seed issued today will likely indeed be the final version of iOS 5 before it goes final for the average Joe. Keeping in mind how Apple releases pre-release software, its safe to say that Apple will drop the final public version of iOS 5 in the next couple of weeks.

Keep in mind that this seed, much like previous beta builds of iOS 5, is only available to registered Apple developers for testing and won’t be downloadable through iTunes for regular users, as mentioned previously. While illegal copies of this seed will likely end up on all popular file sharing sites within hours, the only way to get iOS 5 GM legally is to obtain an Apple developer registration, which is available straight from Apple’s developer website for $99 per year. A developer registration with Apple is suitable for all of those who consider themselves iOS enthusiasts, since it provides many exclusive developer tools and documentation, as well as experimental iOS builds.

In order to be able to sync devices running iOS 5 Gold Master, however, you must first install the latest version of iTunes 10.5, which is also available from Apple’s developer site.

iOS 5, the next major release of the operating system that runs on iPhones, iPod touches and iPads was first announced at this year’s WWDC conference back in June. iOS 5 will be available to public on October 12th. Since this is the GM release, therefore expect it to be the full and final build which would be bug free, hence everyday users which are not enrolled in Apple’s developer program will have to wait to get their hands on it.

UPDATE: You can jailbreak this final version of iOS 5 by following our complete step by step guide posted here (iPad 2 and iPhone 4S are not supported).