This particular release follows hot on the heels of the original pre-release seed of the aforementioned platforms, and once again shows the company’s commitment to progressing all firmware ahead of a major overhaul announcement at next month’s Worldwide Developers Conference. 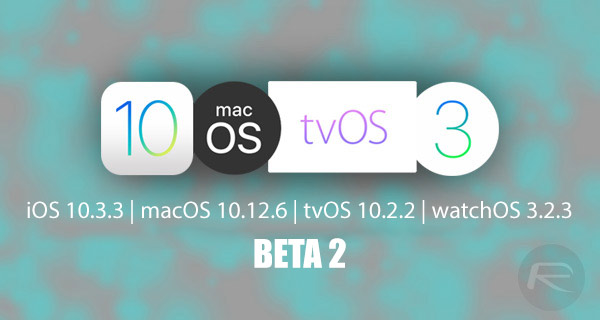 iOS 10.3.3 beta 2: As you might expect, the second beta is a simple continuation of the groundwork laid with the initial seed of iOS 10.3.3. That release included some stunning new coastal themed wallpapers for the 12.9-inch iPad Pro, as well as a few notes about known issues that exist within the firmware which Apple is currently working on and addressing. With those issues, Apple has for one reason or another issued identical release notes to those that came with iOS 10.3.2 beta 1, so we can only assume that certain areas are still in development. Other than that, this is yet another progressive release with under-the-hood improvements and fixes for all compatible device owners.

Registered developers can immediately grab this second beta of iOS 10.3.3 from developer.apple.com right now. Alternatively, if a pre-release configuration profile is installed on the device in question, then the latest pre-release seed of iOS 10.3.3 can be downloaded as an over-the-air update from Settings > General > Software Update.

macOS 10.12.6 beta 2: We’re expecting a nice little reveal of macOS 10.13 at next month’s WWDC, but until then we will have to settle for the progression of macOS 10.12 thanks to this latest beta. As you might expect from a relatively minor point update, it doesn’t actually come with any new features for Mac owners to sink their teeth into but instead focuses on set of internal improvements.

This latest pre-release seed of macOS 10.12.6 can be downloaded directly from the Apple Developer website by those with the necessary authentication. Alternatively, it can be accessed via the Updates tab in the Mac App Store.

tvOS 10.2.2 beta 2: tvOS is one of Apple’s fastest-growing platforms, and can definitely be heralded as a success story for the business. However, this latest version is, unfortunately, less impressive, with this second beta of tvOS 10.2.2 offering nothing more than the expected progression of the initial release. Bug fixes, improvements, and general under-the-hood efficiencies.

This latest beta version of tvOS for the fourth-generation Apple TV can be acquired right now via software update mechanism found in tvOS settings.

watchOS 3.2.3 beta 2: Has it been a while since you looked at your wrist and had the opportunity to installd some new firmware? Well, watchOS 3.2.3 beta 2 will rectify that if you missed the first one. Just like iOS 10.3.2, macOS 10.12.6, and tvOS 10.2.2, there’s not a great deal going on with this latest watchOS release, aside from some internal improvements that should hopefully make the platform a lot more stable and usable on all compatible Apple Watch hardware.

Those looking to install this latest pre-release version of watchOS 3.2.3 can do so via the companion Watch app by heading into the update section. The Apple Watch will need to have at least 50% battery and be connected to a power source.