Those of you partial to Mozilla’s Firefox browser will be pleased to learn that the official release of Firefox 6 has just been unveiled to the public.

The FINAL version has been available on Mozilla’s servers for a few days now, but this the OFFICIAL release, which doesn’t appear to have included any significant changes from said previous final build.

Firefox was one of the first few third-party browsers to question Internet Explorer on Windows and has done a fantastic job of being “The People’s Browser” because of this. It capitalized on Microsoft’s highly flawed native browser and developed a huge user base on its way to becoming the second most-used browser.

It has since felt the pressure of Google Chrome, which is now used by nearly one-in-five internet users, as well as the much improved Safari from Apple, thus the regularity of updates and releases from Firefox. This is a smart move from Mozilla, a company which doesn’t have the same power as GOOG and AAPL, and reduces the risk of the comparatively small company from Mountain View being swamped by the big guns.

There only a handful of potential make-or-break components that surfers look for in a web browser, and Mozilla has built success with its ability to cater for these needs. Renowned for being a clean, largely lag-free and smooth surfing experience the way it was meant to be, the developers have really made some decent improvements to the sixth version of the already great browser. 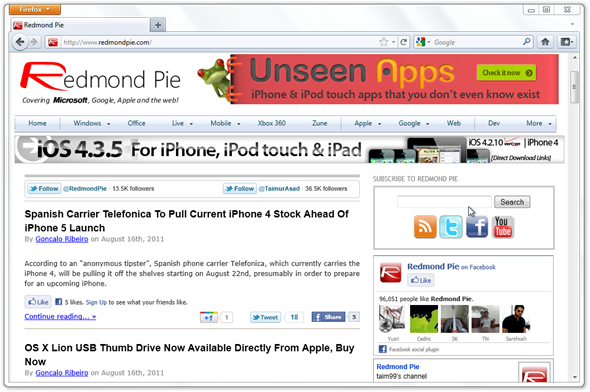 Firefox 6 is faster than its predecessor, and is less of a resource-hog – the two most pivotal components of your everyday browser. Mozilla claims a 20% speed increase, but of course the best way to actually gauge the improvement is to download and test for yourself. There are over 1300 total improvements and bug-fixes listed in the extensive changelog, further emphasizing that Mozilla has been working tirelessly to stay relevant.

Another notable feature in Firefox 6 is the ability to customize privacy features in a site-specific manner. Simply enter “about:permissions” in the address bar and from there you can select which sites you want to store passwords, view your location, set cookies, open popups, as well as maintain permanent storage. While this feature is great, it should be easier to access if it is going to be utilized by surfers. Hopefully Mozilla will consider this when it comes to releasing updates.

Be sure to leave your thoughts regarding the new Firefox on our Facebook Fanpage!