You can now download extra_recipe+yaluX iOS 10.1.1 jailbreak for iPhone 7 after the Italian developer Luca Todesco pushed out a successor to mach_portal+yalu based on xerub’s updated version of Ian Beer’s mach_portal exploit, containing internal changes needed to ensure a smooth and stable jailbreak experience on iPhone 7 hardware running iOS 10.1.1.

This long-overdue update to the mach_portal+yalu jailbreak has been something that iPhone 7 hardware owners have been screaming out for a while now, and most definitely something that whets the appetite when it became known that it was actually in the works. 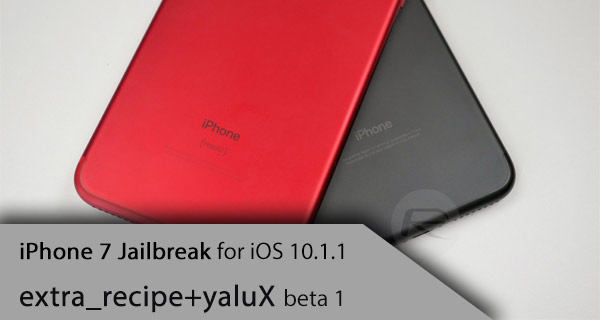 As with previous releases of the tool, including all beta releases prior to it actually being defined as “stable”, the changelog which accompanies this beta release is sparse, but gives an insight into what’s being offered. The first part of that changelog references the fact that mach_portal+yalu in its latest incarnation extra_recipe+yaluX now offers a stable and comfortable experience for anyone running iOS 10.1.1. on an iPhone 7 device. As good as that information is, Todesco has still gone out to provide a little additional information about the release, including a slight warning about a potential issue.

First of all, he has advised that the release “should fix all iPhone 7 related issues,” that were there on iOS 10.1.1 with mach_portal+yalu releases but warned that the initial kernel exploit can still fail when the process is invoked. If that initial process executes flawlessly as intended, then “everything (including backboardd) works.”

Todesco has also advised that device owners shouldn’t run this latest update if the device is already jailbroken as “it’s not actually remounting / as rw and it doesn’t run Substrate.” It’s unlikely that the technical side of the information will mean a great deal to everyone who is interested in this type of jailbreak, but the warning itself should be enough to keep users away from doing something that they don’t fully understand or know how to troubleshoot when/if problems occur.

It’s also important to note that while extra_recipe+yaluX beta 1 is a much more stable jailbreak for iOS 10.1.1, it still does not include Cydia, Substrate and does not remount filesystem as read-write.

Aside from those slight niggles and concerns, it’s ultimately great to see some progress has been made when it comes to offering a stable and comfortable device liberation for iPhone 7 owners running iOS 10.1.1. It’s also exciting to serious progress made in the jailbreak community as a whole with recent talk and speculation about an iOS 10.3.1 jailbreak from Pangu Team.

For those of you interested in giving extra_recipe+yaluX beta 1 a whirl on their as-yet unjailbroken iOS 10.1.1 powered iPhone 7, you can grab the IPA file from here. Once you have the package, simply follow our guide on how to jailbreak your device on iOS 10 here.

As always, we will keep you informed with the latest jailbreak development as and when it happens.