Apparently, a certain Jeff Williams got his hands today on a used Nexus 4 from a Googler – which was purportedly running Android 4.3. What was immediately discarded as a hoax turned out to be true just hours later, when certain individuals well-versed with Android helped Jeff get a system dump of the build that was there on his Nexus 4. From there, it was merely a matter of minutes to reach to a point where anyone with a Nexus 4 can play around with the “leaked” build and experience Android 4.3 before official release.

The interesting thing to note about this leaked Jelly Bean firmware is the fact that it has the same build number as the earlier leak for Samsung Galaxy S4 GPE, JWR66N. This alone was a fairly good indicator that it was probably a real deal. Now that it’s been confirmed, let’s take you directly to how you can flash the leaked Android 4.3 on your Nexus 4. 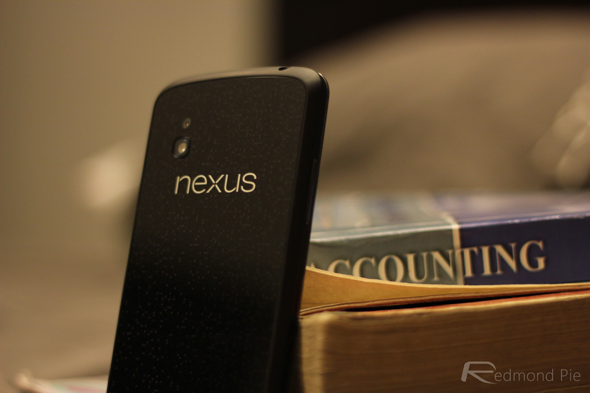 As for requirements, all you need is a Nexus 4 with unlocked bootloader (rooting isn’t a requirement) that you can install a custom recovery on. You can follow our guide on how to unlock Nexus 4 bootloader. While it may seem a good idea to backup your data, it won’t be affected during the flashing process.

Step 2: Download the flashable ZIP file from the source link at the foot of this post, and move it to the internal memory of your Nexus 4.

Step 3: Connect the Nexus 4 to PC and make sure that you have Android SDK installed with ADB configured. Follow our guide on how to set up Android ADB and Fastboot on Windows.

Step 4: Reboot the Nexus 4 into Recovery and wipe cache and dalvik cache.

Step 5: Since you’ve already moved the ZIP file to internal memory of the device, just flash the ZIP as you would do any normal one.

Step 6: Once the flash is completed, reboot and voila! you have successfully flashed leaked Android 4.3 on your Nexus 4.

That’s it – you’re now free to explore Android 4.3 on your device. Enjoy!

It’s worth nothing that TWRP is the preferred recovery for this instead of CWM, since it’s problem-free in the process.