Perhaps no version of Microsoft Windows received as much hatred from both the users and experts alike, as Windows 8. There had been faux pas from the Redmond giant earlier – I , for one, haven’t forgotten Windows ME, or Windows Vista – but the funny thing was, Windows 8 wasn’t either of those. The general negative sentiment towards it usually stems from the fact that Microsoft opted to ‘force’ the users out of their comfort zone for the sake of a better, updated and modernized look. Well, hate it or love it, that’s what we got now.

The best part about Windows 8 is its looks, and if you say that Metro/Modern UI isn’t beautiful – whether on PC or Windows Phone 8 – I say you don’t have much of an aesthetic sense. While the beauty of the UI speaks throughout the OS, one does find it rather limiting that Microsoft hasn’t allowed much freedom for customization of certain aspects, like the Start Screen or the Windows 8 lock screen. There are some options, but only a few, and they don’t let the user set up things the way they’d want to.

Enter Decor8 from Stardock, a new app for Windows 8 that allows new levels of personalization for both the Start and Lock screens. 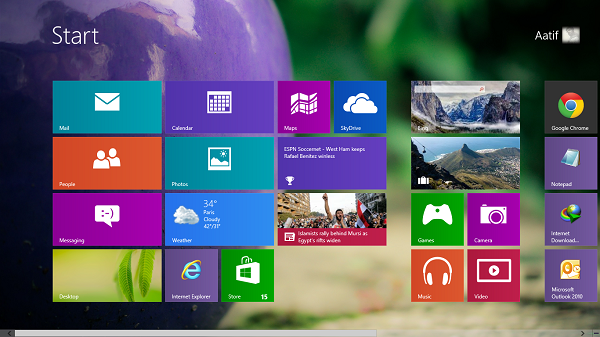 Decor8 adds a new tile of its own to the Start Screen, where you can configure all the relevant options under four major categories: Background, Colors, Options and Lock screen. You may set any image as Windows 8 Start Screen background, or even make a multi-select that will cycle between backgrounds. Further control over the selected image exists in the form of Fade & Blur effects, and Color and Contrast parametric adjustments. 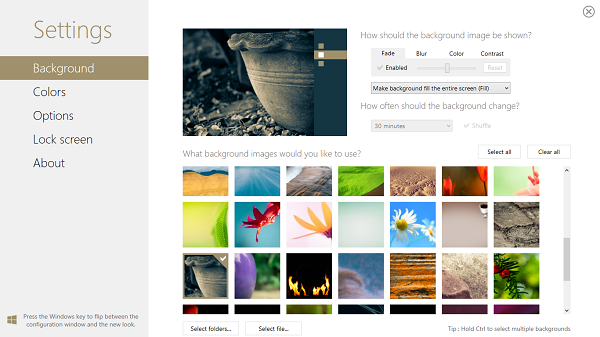 The most interesting part is the color adjustment that Decor8 brings. Not only can you create custom color schemes for Windows 8 – something that had been offered in the operating system’s personalization settings since the days of Windows XP – but also, when you select a custom image, the system automatically adapts all the tiles to the most expressive shades in your background picture. Hence, select that option, and you won’t even have to choose a color scheme manually – things will be auto-configured.

Akin to Start Screen, Lock screen background can also be changed, and there isn’t much to say there. I didn’t find an option to select multiple images for Lock screen, though. 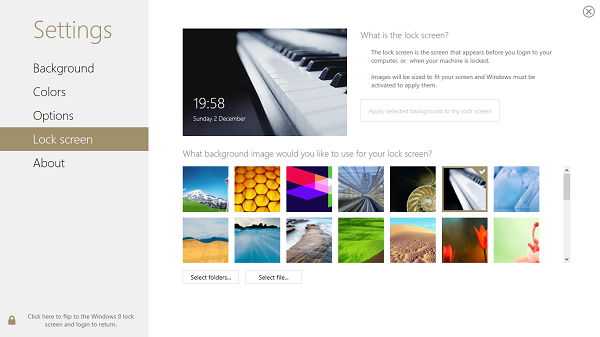 Coming from Stardock, one can rest assured that Decor8 will deliver what it has promised. It’s available for $4.99, or you can get a free 30-day trial before you buy. You can download Decor8 from here.