Apple Is Now The Second Largest Mobile Manufacturer In The U.S. After Overtaking LG Recently

The global smartphone industry is an extremely competitive and tough industry to be a part of, and is one that takes constant innovation in order to stay ahead of the pack. Out of all the smaller segments that make up the global industry, the United States based market is probably one of the most lucrative for companies, and therefore one of the most important to be successful in. For the first time in their smartphone selling history, Apple has breezed passed Korean based LG Electronics to become the second largest mobile device supplier in the US according to recent figures from comScore.

Back in July of this year, Apple was recognized as the third largest supplier of smartphone devices with a United States market share of 16.3% compared to the 18.4% held by LG and the 25.6% leading share held by Samsung. For the three month period ending October 2012, the figures had changed slightly, with Apple gaining 1.5% of the smartphone market to reach 17.8%, with LG suffering the misfortune of actually losing 0.8% of their subscribers to bottom out with a 17.6% share of the US market.

Although Apple and LG are fighting a close battle and are only separated by 0.2 percentage points, Samsung is still sitting pretty at the top of the charts, and actually increased their lead, with a market share 26.3% during the same three month period. Google owned Motorola Mobility and Taiwan based HTC finish off the top five smartphone vendors in the United States with market shares of 11.0% and 6.0% respectively. Although Motorola dropped 0.2 percentage points during the three months, the study has shown that Google has actually managed grow their share of the smartphone platform market. 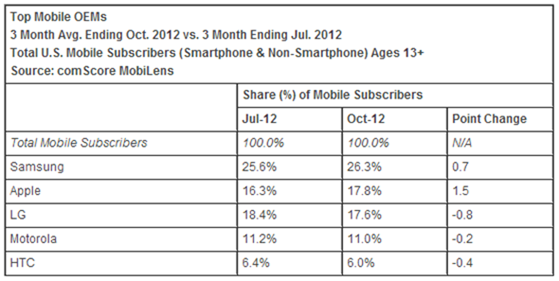 As of October 2012, 53.6% of smartphone subscribers in the United States were allowing Google’s Android operating system to handle their needs, with 34.3% preferring Apple’s iOS. RIM continued their decline by dropping 1.7 percentage points, with Symbian bizarrely still managing to cling on to 0.6% of the American market. In addition to the hardware and software shares, the same report also gives an insight into how consumers actually use their smartphones on a daily basis. 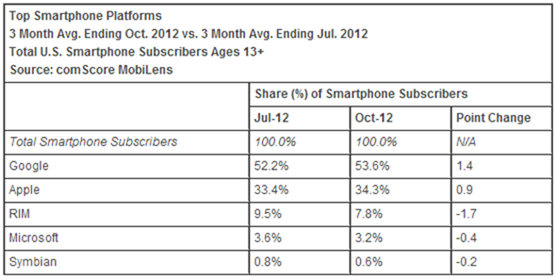 The trends in the information seem to suggest that text messaging and other mobile devices plays a fairly consistent part of the mobile life, but they also show that social network access and mobile gaming is steadily on the rise, with the number of apps being downloaded and used showing the largest rise by 1.9%.