Amazon has started its 24-hour Prime Day savings extravaganza in magnificent fashion. Amongst the plethora of Prime Day deals that have already gone live on Amazon’s website, the online retailer has slipped in the fantastic Google/Huawei-manufactured Nexus 6P for the consideration of smartphone-loving individuals across the globe.

As part of the 24-hour-only reductions on Huawei products, Amazon is offering a huge 25-26% discount on the top-of-the-line Google handset for a very limited time only. 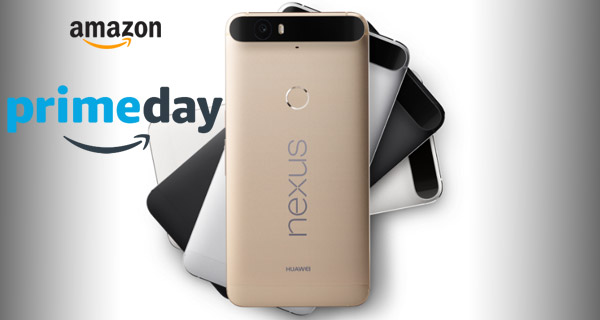 The Nexus 6P, which is designed and developed as part of a collaboration between Google and Huawei, is one of the most well-received Nexus device by both reviewers and consumers, and has a ton to offer for anyone looking for a new premium flagship smartphone at a bargain price.

Originally launched in September 2015, the Nexus 6P is the current flagship in the Nexus range of devices, and although it’s successor is likely to be announced in the coming months, you really can’t turn your nose up at this hardware with up to 25% off – for today only.

Amazon’s Prime Day pricing for the Huawei Nexus 6P start at just $403.75 for a 64GB version of the device in a Silver finish. The same model is also offered at the same price point in Graphite, and Gold, and of course comes as fully unlocked to accept any international or domestic SIM-card, as well as a full U.S. manufacturer’s warranty. The price has been slashed down from $549.00, which represents an impressive 26% saving on the usual list price. Those who have a little additional to spend can grab the larger 128GB capacity version in Silver or Graphite for just $478.75, reduced from $649.00. 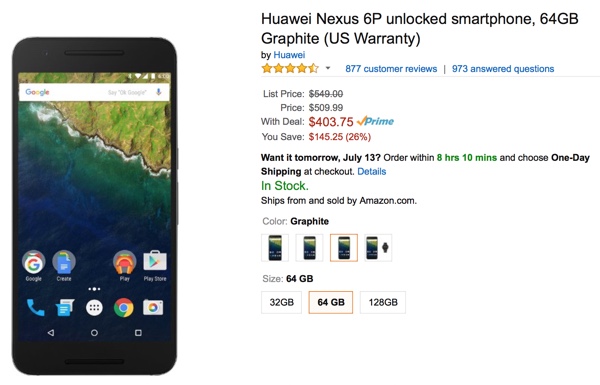 Regardless of the model purchased, consumers will get a 5.7-inch device with an AMOLED capacitive multitouch touchscreen that boats a Quad HD resolution. There’s a quad-core Qualcomm Snapdragon 810 processor internally, with an accompanying 3GB RAM to give it a large amount of processing power. Photography fans can benefit from the 12.3-megapixel rear camera with laser autofocus and accompanying dual-LED flash for high quality images in low-light conditions. And of course, there’s Android 6.0 Marshmallow installed as default, complete with biometric security with Nexus Imprint – the fingerprint sensor on the back.

As this is part of Amazon’s Prime Day deals, it’s worth remembering that this is only going to be around for today only. Make sure you act quickly if you want to own of these at the reduced prices.