Anyone who is a regular jailbreaker of any of their iOS devices will ultimately have a set of must-have tweaks and installations which always manage to make it onto their device as soon as a new jailbreak is released for iOS. Sometimes those packages are installed because they offer something fun and and at times it is because they genuinely make using Apple’s mobile operating system a lot better. Those packages that fall under the category of the latter generally tend to have a much longer shelf life than other offerings in Cydia, well, until Apple natively implements them that is.

One of the most popular packages to hit Cydia in recent times is the Dashboard X tweak that breathed a new air of life into the way we think about and use widgets. Before Dashboard X came along, we only had the Notification Center section to activate and house widgets, and even then we were limited by the available screen real-estate. Thankfully, Dashboard X changed all this by allowing those widgets, and any new package created specifically for Dashboard X, to be placed anywhere on the any home screen for quick and efficient use. 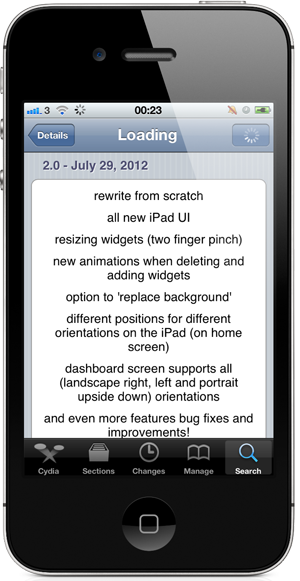 The good news is that Dashboard X has been pushed to version 2.0. The even better news is that the update is a significant one and drastically enhances the experience for existing and new users that are thinking about entering the world of home screen widgets. Although it may not necessarily be noticeable to end-users, the developer has completely rewritten the underlying code of the package to make it more effective and therefore eradicating any existing bugs. The iPad version of the tweak has also been paid particular attention with an entirely new user-interface.

The ability to activate a widget and then resize it has also been added. In previous versions of the software, the widget placed itself on the screen and that was about it. It could be moved to a new location but its horizontal and vertical sizes were already defined and couldn’t be changed. This is no more in Dashboard X 2.0, with the user being able to use two finger pinches to totally change the dimensions of the widgets. A set of new and attractive animations have also been added that occur when widgets are added and remove from the device’s display. 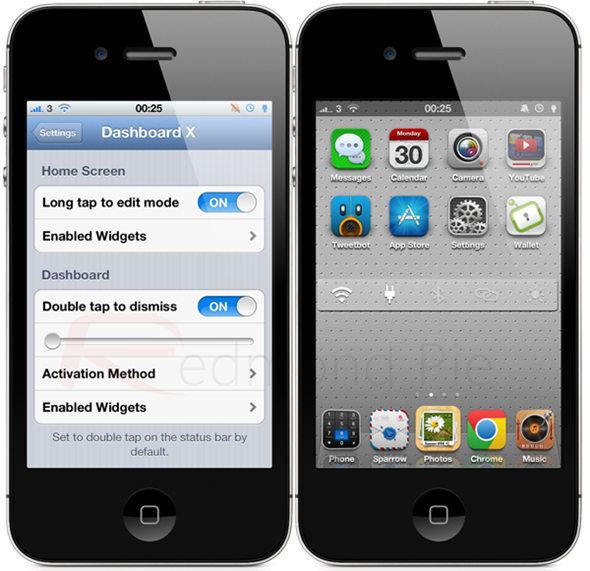 A lot of work has also been put into making sure that the package functions correctly no matter what orientation the user chooses to have the device in. Widgets now function in different positions for different orientations on the device with all orientations being supported. As you would expect in an update of this size, it also contains a whole host of big fixes and performance enhancements which should fix some of the crashing issues that used to occur. Although the Dashboard X update is extremely good and dramatically improves the experience, it is worth noting that if you have the Barrel tweak installed, you won’t be able to resize widgets.

The update is available as a free of charge download to existing users with new users able to grab Dashboard X from the ModMyi repository.