It was only yesterday when the Android 4.1.2 update was officially released to the Android Open Source Project (AOSP) and began showing up as an over-the-air update to Nexus 7 devices in certain territories. The relatively short timescales involved between then and now hasn’t stopped the guys over at CyanogenMod from working their magic and updating their custom ROM to offer the latest Google update to Android.

Today’s nightly release of CyanogenMod 10 offers multiple updates to users who prefer to adorn their smartphones and tablets with a custom installation of Android. The most prominent and obvious update that has been included with today’s release is the upgrade to Android 4.1.2. Before we all go getting excited; it is worth recapping the official update from yesterday and noting that it didn’t contain anything substantial.

The mandatory bug fixes and stability improvements formed the majority of the update, besides that, it contained support for landscape orientation of the home launcher on the Nexus 7. It seems relatively easy for updates of this nature to just state that “bugs have been fixed” without actually going into any specifics, but it is being pointed out that Android 4.1.2 irons out a rather annoying wireless enterprise network connection issue as well as multiple tweaks to the browser, how audio is handled and improvements to a number of other areas.

The latest nightly build of CM10 is based entirely on Android Jelly Bean 4.1.2 and comes packaged with the JZ054K build number. It is also being noted that although CyanogenMod 10 users have already been able to benefit from the home screen orientation changes thanks to the Trebuchet Launcher, the foundations provided by the Android 4.1.2 update have addressed a number of issues with this nightly build as well as adding a couple of nice little one-touch gesture additions. 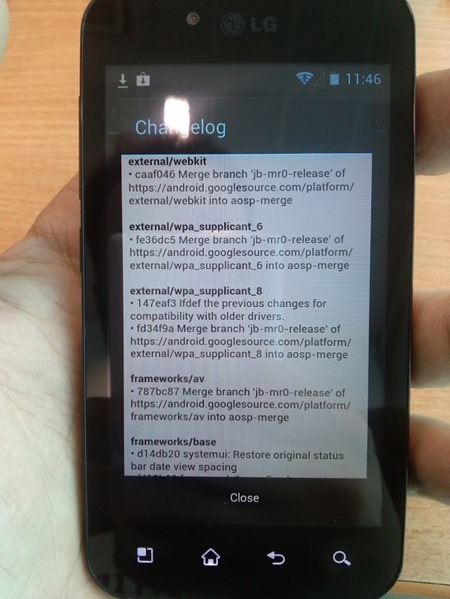 The latest update to CyanogenMod 10 can be found by heading over to the updater app within the device settings. Those who have recently installed the CM10 custom ROM in the last seven days can head to Settings > About Phone > CyanogenMod Updates to grab the updated version with Android 4.1.2. Alternatively, older users can grab the update from their normal sources.