Microsoft has dominated the headlines over the past couple of weeks with its very public preparations for the launch of the Xbox One. But these days its Sony and the PlayStation 4 which is dominating the headlines more, and as well as announcing the PS4 release date, the Japanese company has taken the opportunity at Cologne-based Gamescom to announce some interesting news regarding the all-important initial titles. There will be no fewer than 33 games available for the next-gen machine by the year’s close.

The gaming world has had ample time to assess and scrutinize the two forthcoming consoles since their respective announcements, and with all prior controversy and ambiguity having been cleared up, we’re now at the very exciting part of the build-up where we get to concentrate on the small matter of games. If you’ve got your heart set on Sony’s offering, there’ll be plenty to keep you duly entertained, from those popular shoot-’em-ups to the iconic annual sports titles.

Sony has already made it known that every title released on the PlayStation 4 will be available as a digital download, and while a large portion of the early releases will be digital-only, some of the more popular games will be released as physical Blu-rays, so you don’t lose that warm, fuzzy feeling of queuing at Best Buy to be among the first.

As well as the formality of Call of Duty: Ghosts, titles such as Assassin’s Creed Black Flag, Battlefield 4 and Killzone: Shadow Fall will be available to buy at retail outlets and download, and if you feel like playing something without the necessity of a rifle, the likes of FIFA 14, Madden NFL 25, NBA 2K14 and NBA LIVE will also be available to pick up from all good stores.

Like lesser regarded movies that go straight to DVD, the list of digital download-only titles doesn’t include as many blockbusters, but while Basement Crawl, DC Universe, Pinball Arcade and Super Motherload may not serve as the primary reasons for picking up a PlayStation 4, the popular Minecraft experience may prove a hit if its mobile sales numbers are anything to go by. 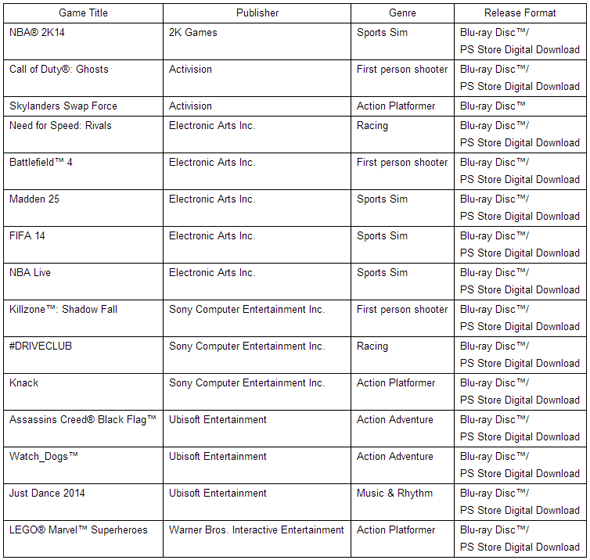 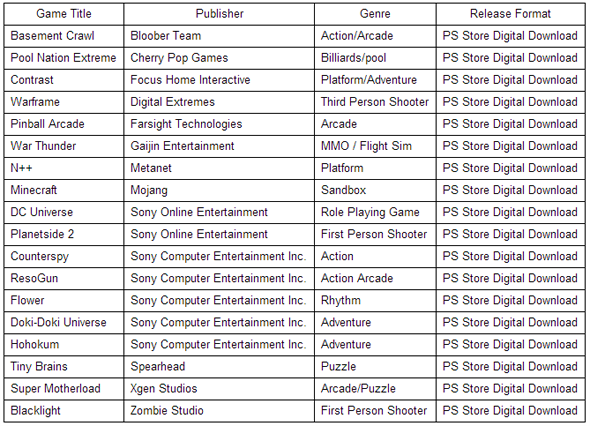 With over 180 PS4 games said to be in development, there’s plenty more where they came from, and although both Sony and Microsoft will try so very hard to gain one-upmanship on the other, the bottom line, is that both consoles will offer more than enough titles than even the most ardent gamer will be able to play.