CNN Now Live-Streaming Their Channel To iPhone, iPad, iPod touch; Here’s How You Can Watch!

US cable news channel CNN has announced that they will begin broadcasting their channel online for iPhone, iPod touch and iPad starting today. 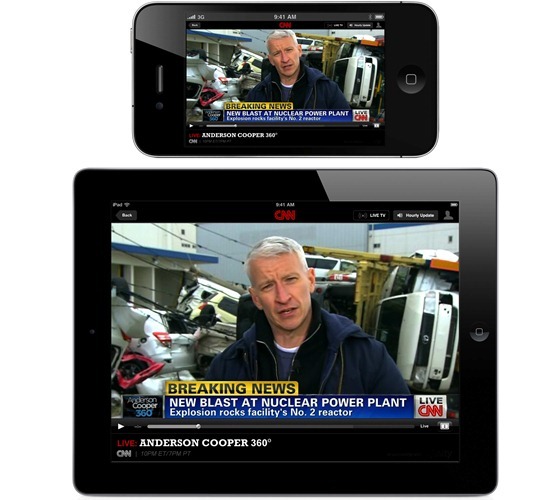 CNN was founded thirty years ago and was the first channel to provide 24/7 news coverage. Today, the network has announced that they will begin live streaming of their channel to iOS devices as well as other supported mobile devices. The streaming will be available on CNN.com and the CNN app for iPad/iPhone/iPod touch. Although this is a bit debatable, the channel claims to be the first to provide such functionality.

From the CNN Press Room:

CNN and HLN’s complete 24-hour television networks will be streamed live on CNN.com, the CNN App  for  iPad and the CNN App for iPhone and iPod touch beginning today, July 18.   CNN Worldwide is the first news organization to stream its linear television channels online and on mobile devices to consumers who subscribe to a multi-channel video service.  Simultaneous to this launch, CNN.com has debuted its new video experience, which seamlessly integrates live network TV into a larger and higher-quality video player, capable of delivering HD quality.

The streaming will be available to approximately 50 million households who have subscribed to the following TV providers: AT&T, Cox, Suddenlink, Verizon, Comcast and DISH Network.CNN has. as such, put its live stream behind a pay wall, which is a bit of disappointment.

The main features includes 16:9 HD-quality video, the ability to create personal playlists (customize CNN to show your favorite programs, basically), access to on-demand episodes, the ability to pause as well as forward/rewind if you’re left behind or are too far ahead.

This is a part of Time Warner (CNN’s parent company)’s TV Everywhere initiative. Other Time-Warner owned channels like HBO, TBS and TNT also allow online live streaming which is free as long as you are a subscriber.

If you want to watch CNN on your iOS device, download the CNN app from the App Store (links have been embedded at the bottom). Once you’ve installed the app, open it up and tap on Live TV and log-in with the user-name+password provided by your cable provider. 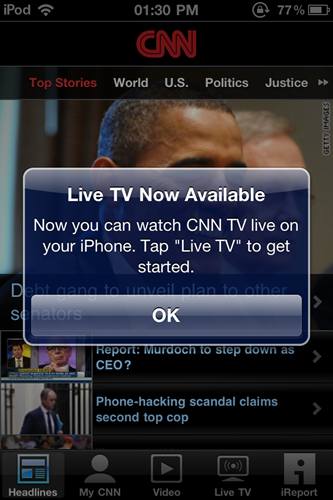 You can watch CNN live on CNN.com/video as well on a laptop/desktop; simply click on the Live tab and log-in with username/password provided by your cable provider.