For those of you that are tired of the Angry Birds phenomenon, we’d like to introduce you to a different kind of puzzle game. Physics will still be involved but now with fewer birds getting hurt or eggs getting stolen. 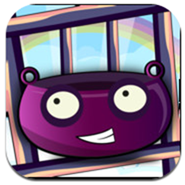 Candy Pot is a new app available for iPhone and iPod touch. As soon as you start the app, you are introduced to the main character: TinTin. 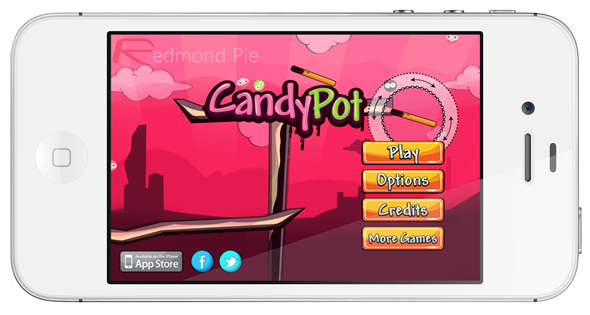 Directly from the developers at Pi Labs, here is his story:

My name is TinTin and I am the Candy Pot. My world was very beautiful and full of chocolates and I loved eating them. Suddenly all of it changed when an accident threw away all my candies in to PomPom. Help me get them back. My world can be a bit challenging, so I need people with brains, like you, to find a way to get all my candies back. It’s my responsibility to warn you that my world is very delicious and addictive. You’ll spend hours lost within. Looking forward for you to feed me.

There are two versions of the addicting little game: Candy Pot and Candy Pot Lite. As you may have guessed, one of them comes with a 99¢ price tag while the Lite version is free and a sort of a demo.

We decided to take the full version of the app for a spin. Here’s our in depth review:

There are 45 levels to the full version of the game, while the free version is bundled with 15. Depending on the difficulty, each level should take you anywhere from a few seconds to a few minutes to complete. If you’re so inclined, you could possibly complete all levels in one evening. There’s some replay value also. You can go back and play any previously won levels to get an even higher score.

The object of the game is to direct a spherical candy to a candy pot by using basic physics and with the help of a few friends including biscuit bars, cotton candies and ice pipes. Some candies are heavier than others, while some biscuit bars are bouncier than others. You’ll be introduced to each type of object as you progress through each level and difficulty.

The biscuit bars (and later on other objects) can be dragged across the screen or rotated to divert the falling candies in the direction of the candy pot. 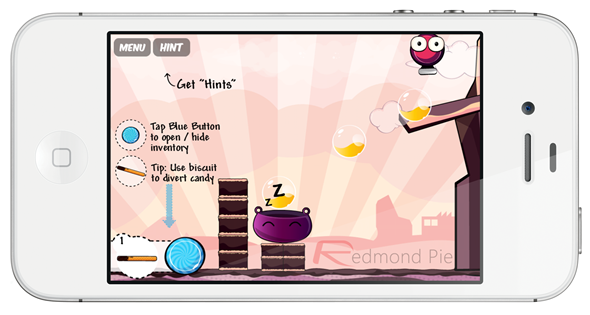 Similarities To Other Apps

For those of you who have played Cut The Rope on your iPhone, iPod touch or iPad, you may notice some similar elements. There’s a creature of sorts who craves candy and you’ll have to use certain devices to get each candy to him. The same physics principles are involved including gravity and speed.

The scoring is also the same. In this case, three candy canes are the best possible score in a level as apposed to three stars in Cut The Rope. Also, like the stars, the candy canes can be achieved by directing the candy through bubbles; there are three in each level. 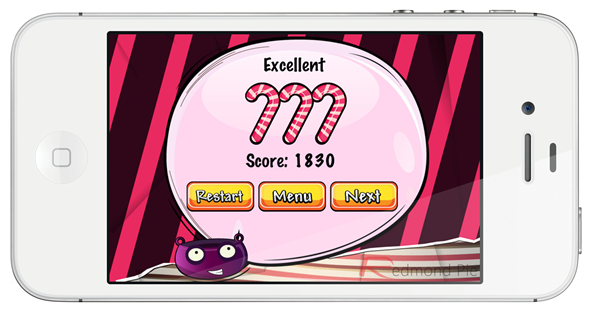 I’ll have to admit; I was a stuck a few times during some of the harder levels. After a dozen tries to get the candy into the pot, I had to resort to using the hint system and boy, does it help you! Sometimes the solution is given right out, showing an outline of where to place each type of biscuit bar. I would suggest a future update to include hints that are a bit more subtle.

If you prefer the sense of accomplishment felt upon completing a game without help, you may want to refrain from using the hint system completely. But even without them, there’s so much room to learn from your error. If at first you don’t succeed, you’ll have a dotted guide showing the candy trajectory. This will help in adjusting your movable objects accordingly. 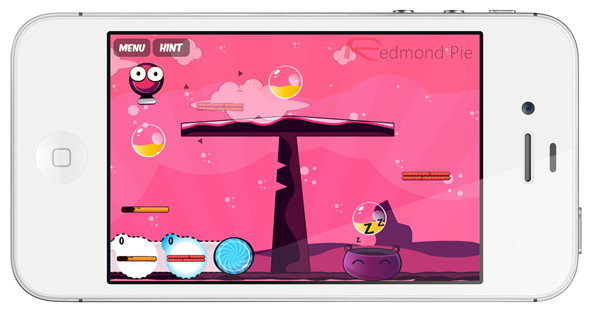 I had no issues with the sound effects and the developers did a great job finding a nice sound for each event. I found the candies yelling out as they’re thrown quite funny.

The music is a bit monotonous, however. It’s a 30 second audio file that repeats over and over (and over). After a few minutes of game play you may become a bit annoyed. The good news is that you can turn the music off in the options menu. I would love being able to play my iTunes library with the game. Hopefully it’s a feature that will be available in a future update. Give the soundtrack a try before you deactivate it, though; you may enjoy it.

Although the backdrop is always still, there is plenty of animation in front of you. Googly and blinking eyes flood the screen from all the characters, from the candy dropper and candy pot to the candies themselves.

I was pretty impressed with the interactive menu as well. I’ve seen many apps shy away from giving too much attention to the start screen; this is not the case with Candy Pot.

Upon opening the app you’ll see an endless rain of multi-colored candies falling from the sky. Along the sides of the screen you can move two interactive biscuit bars to divert their descent. Playing in this screen doesn’t give you any extra points or levels but gives you a general feel for the game.

I did notice a bit of overlap from the terrain and the movable objects; this got in the way of a realistic physics experience. It was also difficult at times to shoot candy after placing pieces in place because an object was in the way. This game isn’t available for the iPad yet but we’re wonder whether the mechanics can be improved on the bigger device. 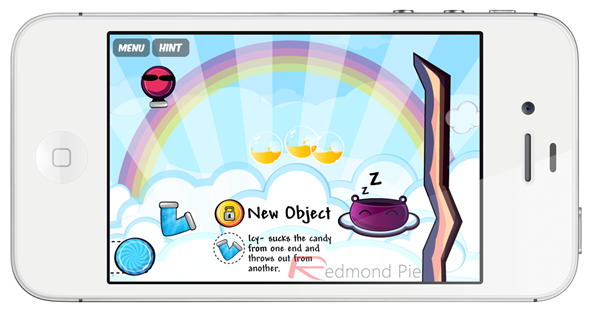 Candy Pot is fun and addictive. I love short games that I can play while I’m waiting in line or have a few minutes to spare. This will be a great collection to the game folder on my iPhone. I do hope the developers will keep on improving on the game engine and add extra levels.

For more on Candy Pot, check out the official Facebook Page here.