The wild success of the iPhone isn’t any secret anymore. The sales figures speak for themselves, the unprecedented interest level in the next iPhone paints its own picture, and the fact that iPhone sales generate more cash than all of Microsoft’s products and services put together proves just how big of a smash hit Apple has on their hands with their iOS-powered smartphone. It isn’t just one thing that captures the imagination of users when it comes to the iPhone, the whole package manages to pull the punters in and that doesn’t seem to end any time soon.

We have already seen during an Apple keynote just how popular the embedded camera on the iPhone is. The late Steve Jobs loved to tell us that the most popular camera for uploading images to the Flickr network was that of the iPhone 4 and with the improvements made in the 4S, the popularity has significantly grown. Although the camera hardware on the iPhone is pretty impressive and the Camera app itself has also grown with recent updates of iOS to include things like native HRD features and in-album editing, it still doesn’t have all of the features that a true photography fan would want and need. 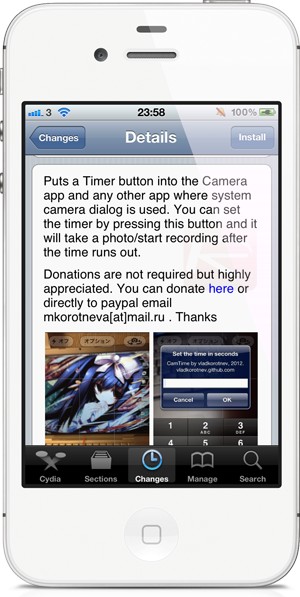 The CamTime package that has recently landed on the Cydia store is one developer’s attempt at enhancing the power of the native Camera app on an iOS device by adding the ability for users to start a countdown timer within the app before it actually snaps any images. This is definitely something that will prove to be extremely popular with a lot of users, and something that has been missing from the iPhone since 2007. Multiple apps in the App Store offer their own camera features with a timer included, and we’ve also covered a tweak before which brings the very same functionality to the iPhone, but CamTime adds the timer functionality without any sort of clutter. In short, CamTime is a plan alternative to the PictureMe tweak which already exists in Cydia. 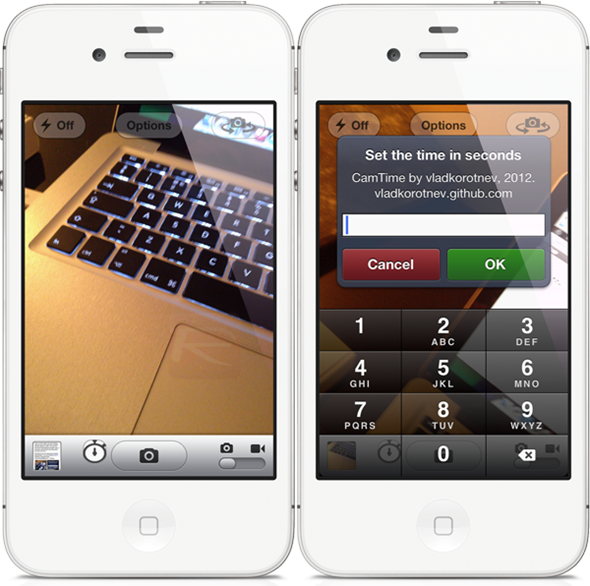 When installed, CamTime doesn’t add any additional home screen icons, but does append the native Camera app with a new icon on the bottom toolbar. Tapping the icon invokes a user facing alert that allows the user to input time in seconds for the app to countdown before it takes the image. Perfect for self-portraits or taking photographs of family members where there is no one else available to take the image.

CamTime is available as a free of charge download from the BigBoss repository with no specific iOS version requirements being given.