Keeping up with the latest game technology sure isn’t a cheap proposition. You go out, possibly lining up to get your hands on the latest and greatest gaming machine that money can buy – we’ll let you argue over which one that is! – and then you’re faced with the question of what software to get for that machine. The problem is that you’ve spent so much on that shiny new box of tricks that you want to be sure, really sure that you’re choosing the right games. Especially when they’re as expensive as the current generation of games seem to be.

With Christmas over and the credit card bills already fit to burst for most of us, being able to save any money at all is a real bonus, so when we heard that Gamestop was giving gamers the chance to save $10 on next generation games from Electronic Arts, we were mighty pleased. Not only because it meant people could save money on games, but because they would be saving that money on some very good titles to boot. Getting a discount is one thing, but if it’s on games that nobody wants, then it’s not quite as exciting as it could be, is it?

Thankfully, with Electronic Arts games being the games on sale, that’s not a problem. Battlefield 4, Madden 25, FIFA 14 and Need for Speed: Rivals are all in the hat at $10 off, with NBA Live 14 also there for those that like to bounce their sporting balls around.

Obviously all these titles are available to buy on both Microsoft’s Xbox One and Sony’s PlayStation 4, so neither side of the console war has to be disappointed here. Which one you have is up to you, but we’re all in it together when it comes to saving our hard earned pennies! 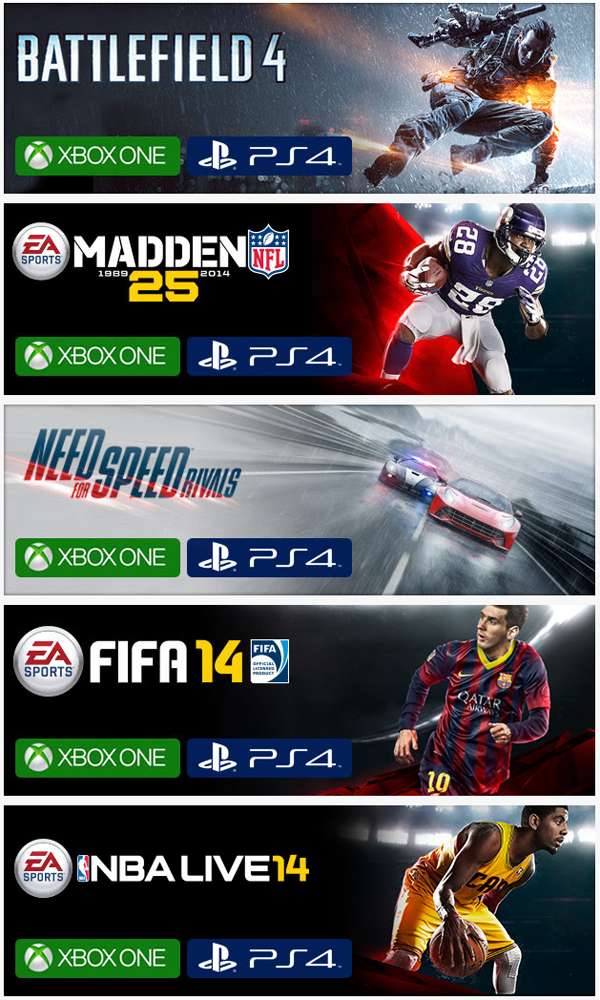 The only downside to all this as far as we can see is that the sale is only on for four days, with December 26th being the kickoff date. So, if you’re on the hunt for discounted EA games on either a PS4 or Xbox One, now’s the time to get yourself down to Gamestop, sharpish.

Now if you excuse us, let us find that credit card of ours and see which titles we want to bag for our console!