Bump For iPhone / Android Updated, Now Lets You Send Any File Type Between Computer And Phone

Bump, the sharing app for Android and iOS, has been updated on each platform, with the takeaway feature being the ability to ‘bump’ files to a computer. It is often the case with the more popular apps that both the Android and iOS versions are given updates at around the same time, and while the iteration for Google’s platform now stands at 3.4.9, the iPhone, iPad and iPod touch incarnation of the app has been, erm.. bumped to version 3.5.6.

The new computer feature is pretty easy to use. To get started, you simply head over to bu.mp on your Web browser, and while it would be rather fun to pick up a computer and ‘bump’ with a smartphone or tablet (not), you needn’t do so in order to being pushing files from your device. Instead of the physical exchange, you instead use the space bar, after which Bump works its mystical magic and begins the transfer of files.

If you’ve never acquainted yourself with the Bump app, you really ought to. It provides a novel way of quickly and efficiently sharing different file types with others simply by ‘bumping’ devices together. For example, when sharing contacts, the most efficient method has always been the sending of the business card, and while that in itself is a great deal quicker than the method the majority of us (lazy) folk utilize (reading the number out from the contacts list), Bump allows a contact to be shared in a millisecond. 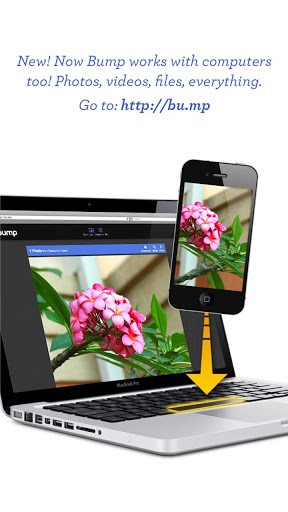 With one bump, one can draw all kinds of information from a newly-made associate, including their social links on Twitter and Facebook, phone number, e-mail, and numerous contacts, as explained above. While it’s great for these meet-and-greet scenarios, it’s also an efficient sharing service for photos and such with friends, and thanks to this latest update, said files can now also be shared with computers. 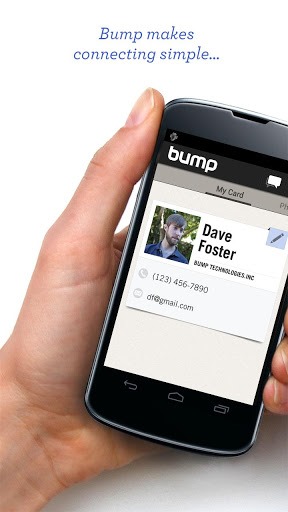 It’s absolutely free to download, and if you’re the sort of person that looks for apps to make your life easier, Bump is certainly a fantastic one to have in the inventory. The Bump app for Android and iPhone were first updated for wireless computer transfers back in May of 2012, but at that time the only supported file type were photos, nothing else. 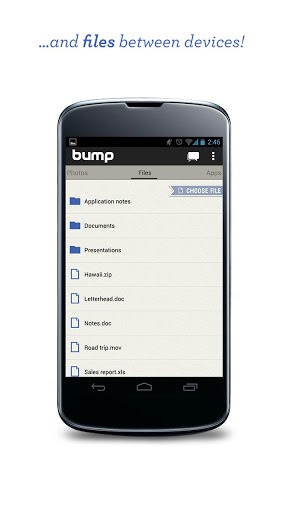 (Source: Bump for iOS on App Store / for Android on Play Store)