In fast-paced world of tech we all know and love, we’re forever looking for those killer apps that make everything just that little bit simpler. Some would consider their smartphone to be as important as a limb, thus when we stumble across apps which enhance its functionality more than just a notch or two, it’s only right that we pay it some homage.

Bump, an app which allows files and data to be exchanged via devices by simply "bumping" them together, has now been updated quite significantly – allowing the same process of mutual sharing to be achieved through phone and computer – at least for photos and images, anyway.

With much of today’s smartphone-centric business done without the use of a USB sync cable, Bump fits right in, and it’s about as simple an app as you can possibly get. All you need to do to get started with the updated version of Bump is tap in the required URL into your browser, tap your prized device to your computer’s space bar, and hey, presto; the photos will begin to appear.

Bump’s CEO Dave Lieb told how he recognized just how quickly the world of image sharing is moving right now, and with Instagram having just been purchased for a billion dollars by social networking company Facebook, now looks to be as good a time as any for Bump to up the image-spreading ante.

There are still plenty of people who would consider an e-mail attachment as the pinnacle of sharing a photo, so services like Bump will certainly help enlighten them on just how much things are changing. It doesn’t require any computer-based software (which, although not much effort to install, is another thing being eradicated from the scene), and once the "bump" has occurred, users can save images with very little hassle.

Interestingly, Lieb also explained the necessity for Bump with all the cloud-based services automatically backing files up. "I’m a technologist," he said, "I don’t even know how to figure iCloud out. [Bump] is just more cognitively simple." 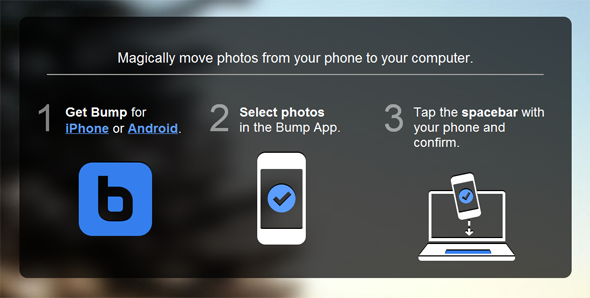 The phone-to-desktop aspect could eventually stretch to other types of files, but Lieb did state that his company wanted to focus on the pet peeves of smartphone users, and as an avid one of those myself, I could certainly vouch that looking for a sync cable to pop the odd photo on a computer can be a real pain.

If you want to check bump out, simply follow this URL: http://bu.mp/