HTC has been working its level best to generate some hype prior to the launch event of its new flagship ‘One’ device next week on February 19th, and among a flurry of leaks and sightings of the device, a couple of intriguing looking high-resolution images have also emerged. We’ve seen the HTC One in white a million times, but the new leak also depicts an accompanying black version, and although it’s hard to make a judgment based on these shots alone, it certainly looks promising.

There’s no question the Taiwanese company has lost its way somewhat over the past couple of years. Its flagship devices have wallowed in the mire in comparison to Samsung, whose Galaxy range has wiped the floor with pretty much every other Android smartphone released by a rivaling vendor.

HTC has ditched the “X” and the “+” in going back to basics with its next offering, set to be called the HTC One, and it’s not the only element which sees the company revert back to old ways. The grille, for instance, is remnant of some of the older HTC models consumers used to enjoy before they departed en masse to Apple and Samsung, and if the handset is to be the big reinvention of the continually-silenced “quietly brilliant” outfit, it will have to attract the same kind of crowds the company is used to.

As well as the device appearing quite a bit nicer in terms of form factor than HTC’s other exports, the HTC Sense user interface has also been reworked to offer an all-round more contemporary feeling. Although some may be sad to see the old, office-like clock disappear from screens, HTC feels it needs a completely new look to outline its reform of the brand. 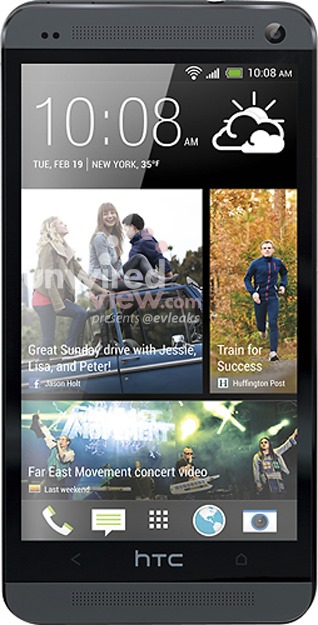 With BlackBerry – another fading force of old – also looking to reinvent itself in 2013, it will be very interesting to see how these two former titans fare against the likes of the Galaxy S IV and the iPhone 5S/6.

The HTC One is just a short moment away, and as we continue to ogle the photos, the question has to be asked – would you consider buying it? And also, are you okay with the fact that the front of the device looks familiar to a smartphone we are already acquainted with? (Hint: iPhone 5)