Boid Is A Twitter Client Exclusively Made For Android 4.0 Ice Cream Sandwich 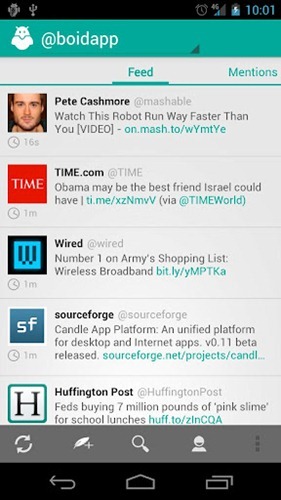 This is the ALPHA release of Boid, a Twitter application designed for Android 4.0 with Ice Cream Sandwich in mind. Designed to be intuitive and fun to use.

It’s only unique feature at this point is its Ice Cream Sandwich UI: you get swipe-navigation between columns such as Feed, Mentions, Messaging etc., Action Bar integration (that gray bar at the bottom) and an overall look based on Ice Cream Sandwich’s Tron-inspired “Holo UI”.

In terms of sheer strength and breadth of features offered, Boid doesn’t have any feature that “wows” you like, for example, Tweetbot on iOS. This actually isn’t a negative point since if all you’re looking for a simple, straight-forward Twitter app (unlike the mess that are UberSocial, Plume and Twicca), Boid will serve you well. 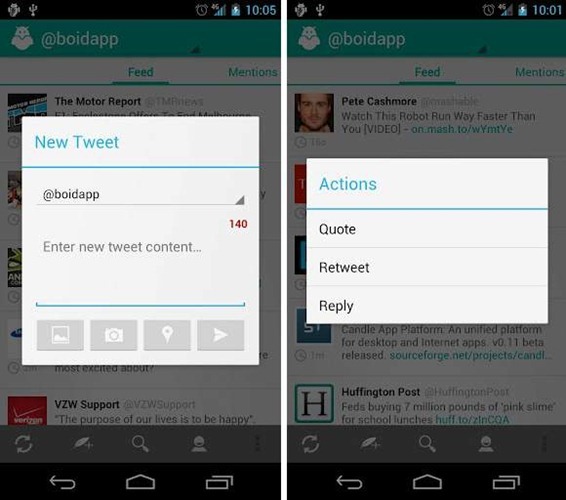 Boid is currently in alpha stage of development so expect bugs and a little instability. Features like a more powerful tweet composer, tweet viewer, a home-screen widget and tablet support are listed as “coming soon”.

Boid is free and can be downloaded from the link embedded below! Please note that it only works on Android 4.0 Ice Cream Sandwich.

If you’re among the 1% of Android users who have a device with Android 4.0 Ice Cream Sandwich, don’t forget to let us know what you think of Boid by leaving a comment over on our Facebook and Google+ page.

On a somewhat unrelated note, there is an awesome live wallpaper called Boids [Market Link] that I suggest everyone should try out.