The battle between iOS and Android will always be the one that is fought between fans of the respective mobile operating systems, but at the end of the day, each platform has its strengths and weaknesses and will ultimately come down to personal choice. As well as the software features and included functionality which Apple and Google roll into their firmware, users will also make their decisions based on the available hardware, and as great as the iPhone is, Samsung also has a fantastic and powerful device with their extremely popular Galaxy S III.

The Galaxy S III has been out for a little while now and has definitely picked up a host of admirers along the way, not only because of the technical specifications which Samsung has rammed into it but also because it’s actually pretty nice to look at and use. As much as we would like to admit that our mobile devices are all about functionality and capabilities, the mobile industry is extremely vain, with aesthetics and visuals playing a heavy part in persuading consumers to part with their hard earned cash.

We’ve recently been hearing some murmurings about the existence of a Galaxy S III being available in a darker color, rather than the bright and rather clinical version which Samsung launched with, but without any hard evidence, it has been difficult to verify. Things have moved on a little and for those who prefer their mobile devices to look dark and slick, then the time has come to rejoice as not only is the Galaxy S III moving to the dark side in the United Kingdom within the next two months, but it looks as though the United States will also be getting the darker version of Samsung’s awesome smartphone. 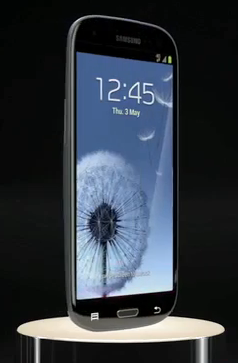 The official American T-Mobile website has been updated with a rather snazzy looking rotating presentation that showcases some of the more popular smartphones available on their network. Nothing out of the ordinary there. However, the keen-eyed web browsers out there will notice that the one of the devices showcased happens to be a gorgeous looking glossy black Galaxy S III. Nothing is ever official until it’s official in this industry, but it’s either a disastrous error on the part of T-Mobile, or an indication that we can soon be snapping up the a black Galaxy S III. Here’s hoping it’s the latter.