Although we now know the Samsung Galaxy Note II will be unveiled at the South Korean company’s IFA 2012 event on August 29th, that doesn’t mean we should cease all speculation and wait for the official showcasing. The leaks are still arriving thick and fast, and NowhereElse, a site which seems really in the loop with regards to upcoming tech products, has leaked the purported front panel of the forthcoming handset, and by running a ruler across it to measure the diameter, also seemingly confirmed the 5.5-inch size reported on numerous occasions.

The first Galaxy Note released last year, and while it naturally garnered plenty of criticism and negative press from those who deemed it too large to make an impression, the "phablet" has surprised many in becoming a main-stayer. Sure, it didn’t manage to compete with the Samsung Galaxy S II in terms of sheer units sold, but not many smartphones manage to reach those numbers, and if nothing else, the Note taught us there is a place in the market for a smartphone pushing tablet size.

This front panel leak measures in at 14 cm diagonally give-or-take, and that equates to around 5.5-inch in screen real-estate. Not only great news for those partial to the extra room, but it will be the largest smartphone (in terms of screen size) on the market. It appears the bezel has been thinned out in comparison to the "small" first Galaxy Note iteration, which means the next device itself may not be larger, despite the display measuring in around 0.2-in larger. 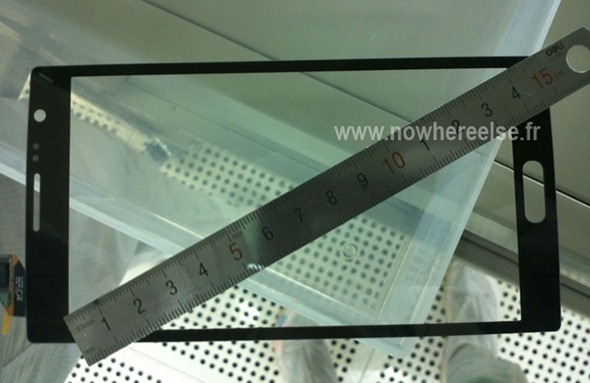 Some reports had suggested the Galaxy Note II would follow in the footsteps of Samsung’s flagship Galaxy S III in terms of form factor, offering a smoother, more curved look. This leak certainly dispels that notion, and I personally think the Note II is a lot better off maintaining the squarish identity seen in the first iteration.

In terms of the innards, we’re expecting nothing less than a quad-core Exynos 1.6Ghz processor, a 5.5-inch 720p Super AMOLED display with 16:10 aspect ratio.

As mentioned earlier, the device will be announced at Samsung’s IFA 2012 event on August 29th, so with only two weeks to go, those anxious for the big reveal won’t have to wait much longer.