Microsoft’s Surface RT has not been the most successful of tablets since its release late last year, and although a myriad of factors have contributed to its shortcoming in the market, the fact is that tens of thousands of units remain unsold. As such, Microsoft has already dropped the price on a couple of occasions to try and boost sales, but with today being Black Friday and all, Micro Center has come through with an exceptional deal offering both the Surface RT and a Touch Cover for just $179.

It’s easily the cheapest deal to date, and although, since it runs on Windows RT and an ARM processor, you won’t be able to run legacy apps, the fact that you can still run Office RT means you can take advantage of the Redmond’s excellent productivity range.

The major retailers are tripping over each other to woo the consumer this Black Friday weekend, and the deals just keep on coming. What was once a one-day event has turned into a four-day weekend of promotions encompassing “Cyber Monday,” and with tablets being among the most sought-after gadgets in the tech community, you could really save a bomb on a brand-new Surface RT.

Last month, Microsoft superseded the Surface RT and with it, dropped the “RT” moniker, and although the newer device offers substantial improvement over its predecessor, there’s still enough about the RT model to warrant the small fee of $179.

With 23 Micro Center stores across the U.S., you might want to head down to your local outlet promptly if you do want to miss out, and if the thought of a cheap RT has piqued your interest, be quick – the price is only valid for today. 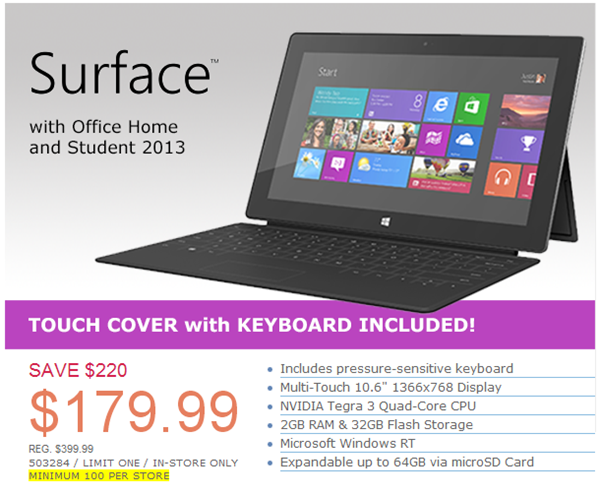 With the Touch cover also included, this deal is a great deal better than anything you’re likely to find. Both Microsoft and Best Buy are selling the device for $199 sans the cover, so you’re saving a fair wad whilst also getting something for free.

Unfortunately, you can only claim the tablet by heading down to a Micro Center retail outlet – you cannot take advantage of the offer online. But hey, if there are more offers like this in-store, you’ll probably be glad you made the trip!