It’s a fact of humanity that some of us are better at managing money than others, and for those looking looking to keep track of every outgoing bill, help is at hand in the form of BillTracker for iOS. Created by developer SnapTap and costing $1.99 over at the App Store ($2.99 on iPad), it syncs effortlessly into your schedule, and makes the process of monitoring your money less taxing than Uncle Sam.

With BillTracker, adding a new bill or payment is as easy as tapping the ‘+’ button and setting a date and amount. Anything due in the immediate future reaches the Upcoming menu (supported by push notifications), so if you frequently find yourself panicking at the last minute with regards to rent, or a particular bill, BillTracker will ensure you have plenty of forewarning. 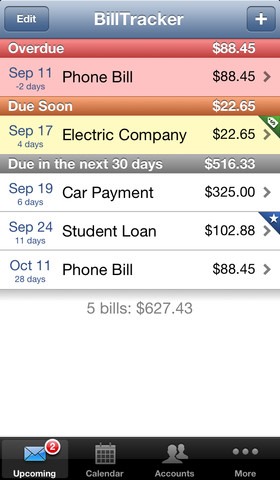 It’s easy to distinguish between your different payments, such as car, house, water or electric, because BillTracker allows you to add accounts for different services with ease. In each account page, you have a full breakdown of your bills through time, as well as any relevant information (website, phone number, email) regarding the company to which the payment is owed. 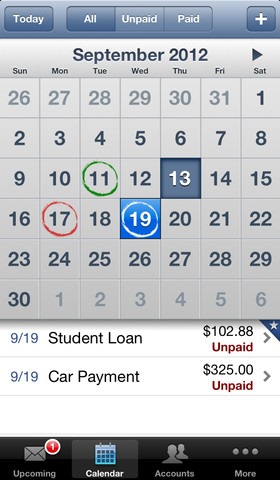 A warning banner appears when you’re overdue a payment, reducing the chances of nasty repercussions, and you can even keep a log on each account thanks to the handy Notes feature. Also, the calendar view – which looks quite similar to the native Calendar app – lets you view your month in the traditional, easy-to-digest manner, and while the app is fairly simple all told, it does exactly what it purports to do. 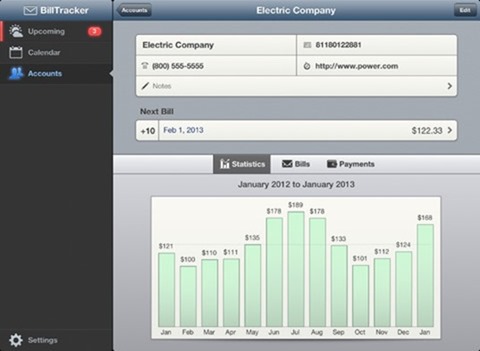 Although I am impressed by the app overall, I do have one particular gripe. For some reason, SnapTap has decided to release the iPad and iPhone apps separately, which means, if you want all of the syncing-between-device benefits offered by BillTracker, you’re going to have to pay twice. This practice was commonplace when the iPad first appeared back in 2010, but nowadays, most devs try to release apps universally, ensuring loyal customers enjoying their app aren’t charged twice.

The iPad version is $2.99, with the iPhone version arriving at $1.99. While both are, in my opinion, individually worth the money, the collective $5 fee might prove too rich for some.