Best Buy Is Flying The Apple Flag, Selling Almost As Many iPhones As Apple Directly Does

The iPhone is one of those devices which is always going to be popular across a wide class of consumers. On one hand it is an intelligent smartphone device powered by one of the world’s most advanced operating systems that will appeal to buyers who crave a phone capable of handling their hectic schedules. On the other side of that coin are the users who care more about what it looks like, and the name attached to it, the ones who will always favor form over function. Fortunately for Apple, the iPhone provides enough bang for the buck to cover both sets of consumers and is one of the main reasons why it is so popular worldwide.

The popularity of the device is also down to – in some part – its exclusivity. Unlike a number of other smartphones you can’t just walk into the local electronics store and grab one off the shelf as Apple is very particular about who sells their products. The decision that was made a few years back to make Best Buy one of the company’s official resellers is looking like it was a shrewd move if recent survey results are anything to go by. It seems that someone somewhere spends their days producing surveys about pretty much anything, and if you were the type of person who wanted to see some data about the volume of iPhone purchases by individual retail outlets then the good people at Consumer Intelligence Research Partners (CIRP) have you covered.

The survey shows that for the three month period between December 2011 and February 2012, Best Buy was responsible for 13% of iPhone sales within the United States compared to 15% directly from Apple themselves. The sales from Best Buy have been achieved thanks to their 1,100 outlets across America, as well as having an extremely active and popular online store. Out of the consumers surveyed who purchased an iPhone in that time frame, 76% of them chose to physically visit a retail store and have a hands on, face to face experience with the iPhone before purchasing, with the additional 24% happy to sit back in their arm chairs and order through an online store. 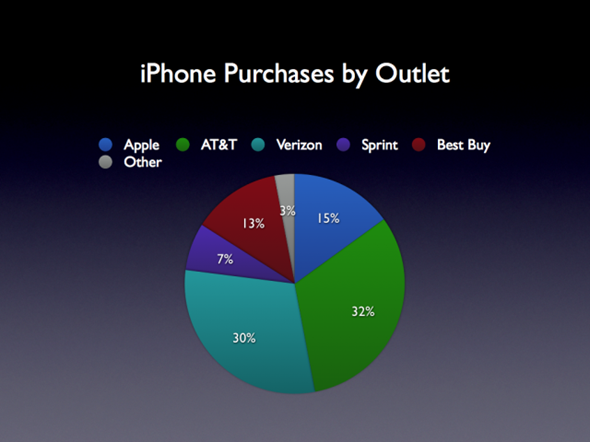 As you might expect, the AT&T and Verizon networks were responsible for the highest numbers, shipping out 32% and 30% respectively of the iPhones sold to the users who were surveyed. Making a somewhat mockery of their name, Sprint were lagging behind with a meager 7% of sales with the additional 3% being made up through other, smaller sales channels such as Wal-Mart and Radio Shack. Josh Lowitz, who is a member of the CIRP team stated:

Apple Stores and the Apple Web site are tremendously productive, but they are limited by their relatively small retail footprint. There are four times as many Best Buy stores, and probably 20 times as many AT&T, Verizon, and Sprint stores, so aggressive distribution through all these channels is critical to Apple’s U.S. strategy.

The fact that Best Buy operate out of 1,100 physical locations around the United States has largely contributed to their sales percentages and when coupled together with the fact that the company often draws buyers onto their website through clever marketing like offering iTunes vouchers promotions; it would seem that Apple made a profitable decision to form a sales partnership with them.