BBM For Android Gets A Hands-On Video Demo

It’s no secret that things could be better over at BlackBerry. New men in charge at the top and dwindling sales and market share have been the story of the last few years for one of Canada’s most famous exports. And things don’t show any great sign of settling down just yet.

In what is a nod to the fact that BlackBerry’s hardware may not be as marketable as its software and services, the company is already well on the way to making BBM to both the iOS and Android platforms, removing what was arguably the biggest reason to get a BlackBerry handset instead of, say, an iPhone 5 or a Galaxy S4. Removing unique selling points may not seem like the best idea, but sometimes needs must, and at the moment BBM is one of the few things that BlackBerry can be proud of.

Both the iOS and Android versions of BBM are tipped for an October-time release to the public, but apart from that there has been little news or leaks claiming to purport to offer an insight into what is around the corner for BBM. That hasn’t stopped video appearing online that seemed to show BBM running on Android. We say that it seemed to, because the video has since been made private, which means nobody can actually watch it. Still, it’s the thought that counts! 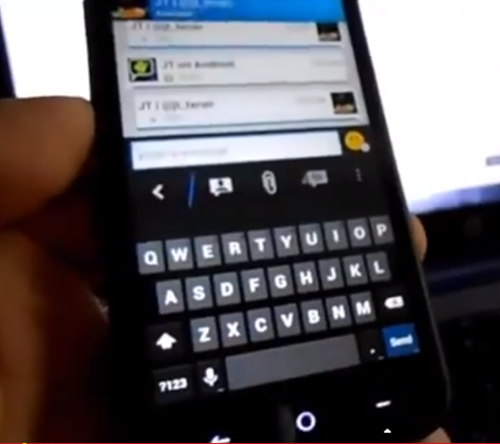 BBM on the iPhone and Android devices is a big leap for BlackBerry, and with WhatsApp and Apple’s own iMessage already very well established it’s going to be an interesting time to see whether BBM can compete, especially now that the maker’s handsets are much less in vogue than they used to be.

We know we’re less than thrilled at the idea of having yet another messaging account, but we know some are tied to the BBM world. How good the experience will be remains to be seen, but if you’ve been waiting for your BBM fix on non-BlackBerry devices, then it may be just a few short weeks until you’re golden.

UPDATE x1: Looks like the video is back up!