Since the launch of the iPhone 4S in October this year, it seems that a week cannot pass by without new rumors and speculation emerging regarding the release of a new Siri port allowing users of older generation devices to take advantage of the advanced features that the Apple’s new personal assistant offers. Some of the well publicized solutions have been nothing more than a port of the Siri GUI, while others have been genuine working hacks which unfortunately require the illegal distribution of files to make it a sustainable solution for the masses. 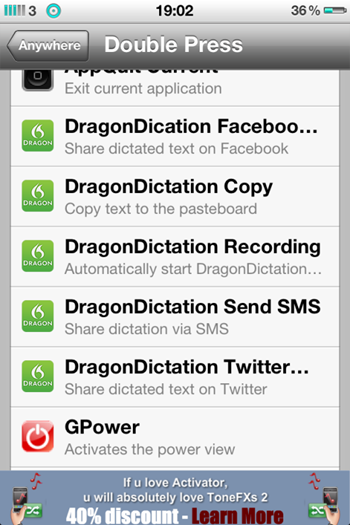 So what are the alternatives? Until Apple decide to officially extend the Siri functionality to older devices, or the development teams find a legal and sustainable way of distributing the required files, non 4S users will need to settle for alternative, albeit less functional dictation methods. One such alternative comes from a Hungarian developer called Arpad Goretity (a.k.a. H2CO3) who has recently released the Automatic Dictation tweak to Cydia via the Big Boss repository. The tweak in question allows users to directly control the Nuance Dragon Dictation iOS application via Ryan Petrich’s widely used Activator tweak. It is worth noting at this point that the tweak is in no way intended to act as a replacement for Siri, the lack of real core functionality is testament to that. The developer makes it known in the release notes that Automatic Dictation offers Siri ‘like’ emulation services combined with the ease of use that comes with user defined Activator gestures.

At the time of writing, the Automatic Dictation tweak is at version 0.2 and offers users the ability to begin dictation, post directly to Twitter and Facebook, copy text to the pasteboard and send the dictation via the built in messages application all by setting user defined Activator gestures. The Dragon Dictation application has grown in popularity since the launch of the iPhone 4S due to the fact that the Nuance technology it is built on is also used to power the new personal assistant, and whilst Arpad’s tweak is in no way a replacement for Siri, it does offer some extremely useful shortcut methods to be set for regular users of the Dragon app.

Our friends at iDownloadBlog have shot a very nice video walkthrough of the tweak in action:

Automatic Dictation is available free of charge via the Big Boss Cydia repository now, with the source code also being freely available via the developers Github page.