Are You iOS, Android Or A BlackBerry? This State Map Will Tell You

What mobile operating system is more popular in your state: iOS, BlackBerry or Android? Not only enthusiasts have been asking themselves that question, advertising research firms have too. Jumptap, one of those agencies, was nice enough to release a map of the United States laying out which states have more Android, BlackBerry and iOS users.

As you can tell from the image below, most states are actually Android states, even though Apple has now edged out Nokia as the world’s largest phone manufacturer. In states like California and Washington, Android has an edge, which isn’t surprising since they’re both “geeky” states. States like New York are often seen as business-active states, and indeed the typical “business” phone is still the BlackBerry, therefore one would assume that they’d be more popular in that area. States where iOS is the most popular just don’t seem to have much in common, pointing to the system’s broad appeal.

California, Texas and Florida over-index for Android use and states in New England and the Midwest over-index for iOS use. BlackBerry use, which over-indexed in New York, was also included in the geographic data. 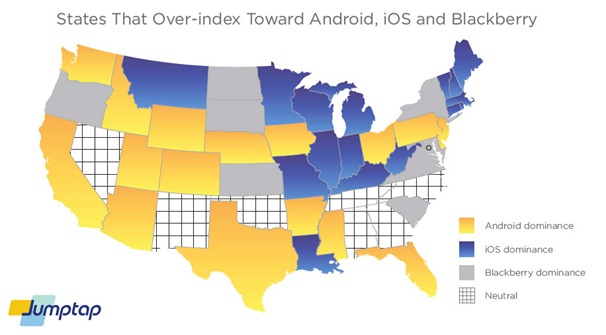 Of course, it’s hard to justify the popularity of each phone in each and every state. More often than not, there simply isn’t a reason, but it’s interesting to theorize. This data, more than anything else, will help advertisers target their ads at the right users in the right states, yet expect the map to change as months and years go on, since smartphones are replaced fairly often these days. Indeed, the landscape was very different 4 years ago, before iOS was released, when the gold standard of smartphones was BlackBerry and what was previous known as Windows Mobile. Fast-forward to today, the paradigm has shifted, which only proves that it will change just as much in the next 4 years.

Meanwhile, competition will remain tough. With the release of the iPhone back in 2007, its competitors were forced to compete with features they had never predicted, such as full desktop-like mobile web browsing and an effortless touch screen user interface. Android, which became available nearly 2 years later, has since then risen up to be Apple’s main competitor and won over several states, as you can tell from the image at the top of this article.

Where will the mobile market be in 4 years? Thankfully, we’ll have ad agencies to inform us with more nice-looking maps.