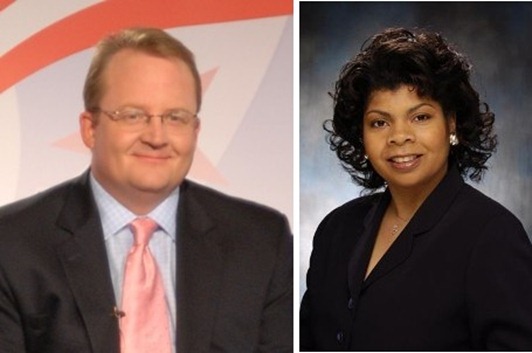 APRIL RYAN: Was there a concern in this White House that she came out being, some might have called her the ‘belle of the ball,’ overshadowing the first lady at the…
ROBERT GIBBS: I don’t who some are. I’ve never heard that. Again…
RYAN: Well, it’s been bantered around Washington, and it’s been in Democratic circles as well as Republican circles, high-ranking people…
GIBBS: April, I, I, that’s not a station I live in in life.
RYAN: Just answer the question, please.
GIBBS: Are you done speaking so I can?
RYAN: Oh yes, I’m done.
GIBBS: I’ve not heard any of that criticism. I’ve not read any of that criticism. The president, the first lady, and the entire White House staff are grateful for the job that she does. And thinks she has done a terrific and wonderful job pulling off a lot of big and important events here at the White House.
RYAN: Did she invite herself to the state dinner or was she a guest? Did the president invite her or did she put her… No, that’s a real question. Do not fan it off. I’m serious.
GIBBS: I, I, Jonathan-
RYAN: No, no, no. Did she invite herself or did the president ask her? Her name was on that list, and social secretaries are the ones who put the names on the list…
GIBBS: Right. Was she at the dinner? April, April, calm down. Just take a deep breath for one second. Now see? This happens with my son. He does the same thing.
(Here there is an Audible reaction from other reporters as, Ryan mouths, “I’m older than your son.”)
RYAN: Don’t play with me. I’m being serious. Do not blow it off.
GIBBS: I’m not… And I’m giving you a serious answer. Was she at the dinner? Yes. She’s the social secretary.
RYAN: Social secretaries are not guests of the dinner.
GIBBS: She had the primary responsibility for running the dinner. I’m going to get back to weightier topics like 98,000 men and women in Afghanistan.

Here is a video of the episode in which you can see it for yourself.

Behavior of this kind from people in such high positions is neither expected nor appreciated.