It’s been a while since we had a good Apple patent that got our juices flowing, but this latest one somehow manages to get us excited and rather dismayed both at the same time. The patent in question is called ‘Projected display shared workspaces’ and while the name may be particularly uninteresting, the technology it promises is actually far more interesting than it sounds. See, it would appear that Apple is working on the idea of incorporating a projector right into its range of devices, specifically those running iOS. Interested in knowing more? You might want to head past the jump.

More than just allowing people to project their presentations onto a wall inside a meeting room, Apple’s implementation of a projector goes one step further. In fact, Apple is trying to make the entire thing interactive by making it possible for people to control the on-screen content using gestures. According to the patent, the technology would monitor shadows being casted by a user’s hands, for example. The technology would also be able to work across multiple devices, which could prove interesting should this actually work its way into a real shipping product.

The idea of putting projectors into smartphones isn’t actually something new. Ironically enough, Apple’s main competitor, Samsung, has already shipped a handset with a projector built right into it. The Galaxy Beam wasn’t exactly a roaring success, but it was proof that putting a projector into a smartphone was indeed possible, even if it did make it look less than visually appealing.

Samsung’s solution would no doubt be a different take on the idea, and while Samsung’s idea was to make it possible to project movies, Apple appears to be focusing on the workplace rather than media. 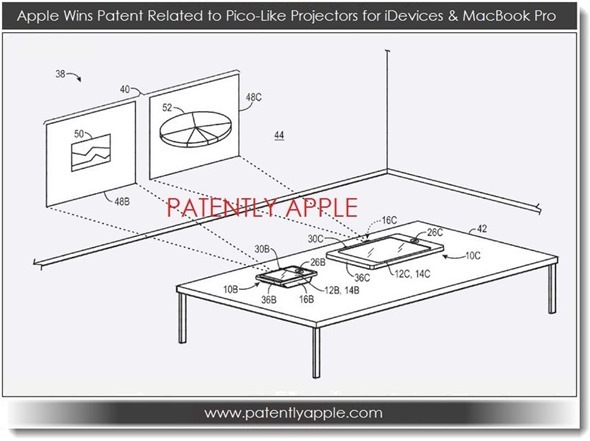 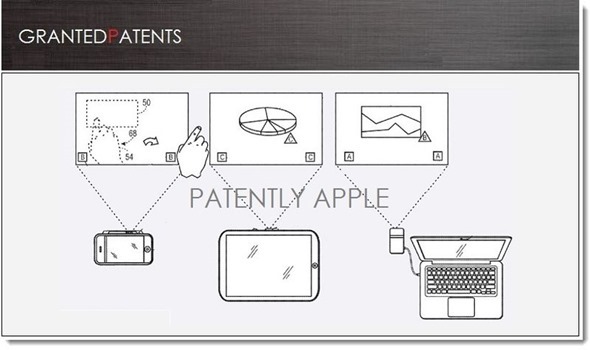 There are already plenty of devices that turn iPhones and iPads into projectors, the Pocket Projector for iPhone, for example, but the idea of having the technology built right into the device itself is always going to be more appealing than carrying around an accessory depending on the quality. We suspect Apple won’t use this patent in a shipping product until it’s just right, though.

It’s somewhat strange how (and why) Apple keeps on patenting ideas that never see the light of day. Either they’re protecting their ideas, or, are going to reveal something big and we won’t even know about it!