If it seems like you can’t open a webpage these days without it being full of Apple Watch news then, well, you’re probably just going to have to come to terms with that for the next few days at least. Apple’s first wearable goes on sale this coming Friday, and it’s causing quite the stir. With three models to choose from it’s not always easy to make that particular buying decision, and if you are concerned about the durability of your smartwatch then things are particularly complicated because the cheaper Apple Watch Sport comes with a different screen to the Apple Watch and Apple Watch Edition.

While the two higher-end Apple Watch devices feature a sapphire screen, the Sport model comes with an Ion-X display that some had worried may be more prone to scratching. We have already seen videos of people scratch testing that sapphire screen we mentioned earlier, and now we have a similar clip to pore over. Produced by YouTube user Unbox Therapy, the new video takes the Sport’s Ion-X screen and subjects it to a few different torture tests including knives, wire wool and sandpaper. 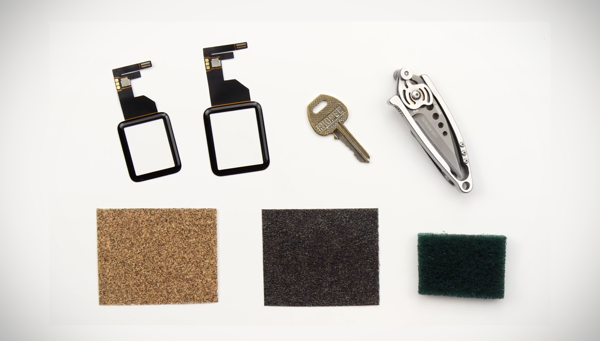 Thankfully for those who have an Apple Watch Sport on order, the Ion-X screen stands up to everything except the sandpaper which probably shouldn’t be too concerning for most. The Ion-X screen uses the same material as the iPhone 6 and iPhone 6 Plus, so it’s certainly not soft in any regard. We don’t expect to hear of any sort of ‘scratchgate’ affair for the Apple Watch and, after all, it’s an expensive device that most people will try and keep safe regardless. Following this new YouTube video though, we should be able to rest safe in the knowledge that even the cheapest Apple Watch should withstand the odd accidental knock or two.