Apple has just increased the number of apps which can tie into the Apple TV Siri universal search functionality by two, with support for both the AMC and The Hallmark Channel now included for users in the United States.

Fans of the popular TV shows, such as Better Call Saul and The Walking Dead, are now able to search for episodes of the shows via universal search and Siri functionality present on the fourth-generation Apple TV set-top box.

The Apple TV has really taken off with the advent of the Apple TV 4, especially with the evolution of the tvOS platform and the tvOS App Store.

For those unfamiliar with the feature, universal search allows users of Apple TVs to search for media using either Siri or universal search text input. The benefit here is that searching for a movie, for example, need not be a case of launching apps individually and then searching until the content is found. Instead, searching in one area will allow tvOS to search across multiple apps in an attempt to find what is required.

When the fourth-generation Apple TV was launched – the only Apple TV hardware to support universal search – the feature was limited to only a handful of apps. This number however is now steadily growing since this past year, with AMC and The Hallmark Channel joining the list of supported Apple TV apps. 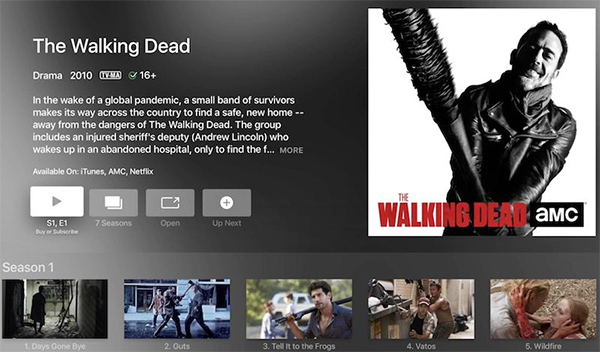 Users in the U.S., Australia, Canada, and the U.K. are all able to take advantage of a huge array of apps with universal search support. In some countries though, like France, Germany, Mexico, the Netherlands, Norway, Spain, and Sweden, only iTunes and Netflix are among supported apps for universal search.