Apple To Attend Mobile World Congress (MWC) 2017 As An Exhibitor?

In a move that has surprised most, Apple has been listed as an exhibitor at 2017 Mobile World Congress (MWC) event, set to begin on February 27th next year.

The event, which takes place annually in Barcelona is the world’s largest exhibition and conference for the mobile industry and while companies such as Samsung, HTC, LG and even Microsoft have often used it as a launchpad for new products, Apple has never attended. Next year will change that.

In fact, Apple hasn’t attended any third-party trade show since Macworld way back in 2009. The move to be part of Mobile World Congress next year is an interesting one on many levels, and shows yet another change to the company which once made a big deal about not needing events such as Macworld or Mobile World Congress in order to show off its wares.

In fact, Apple was so pleased with the performance of its Apple Stores along with its own ad-hoc product announcement events, that it decided it no longer needed the help of third-parties in order to get its new products before the eyes of the world.

Since that time, some of Apple’s biggest product announcements have happened on its own terms. With no set dates imposed upon it for when products could be released, Apple seemed pleased with its lot. However, with Mobile World Congress 2017 now set to boast Apple as an exhibitor, perhaps this stance has begun to change. 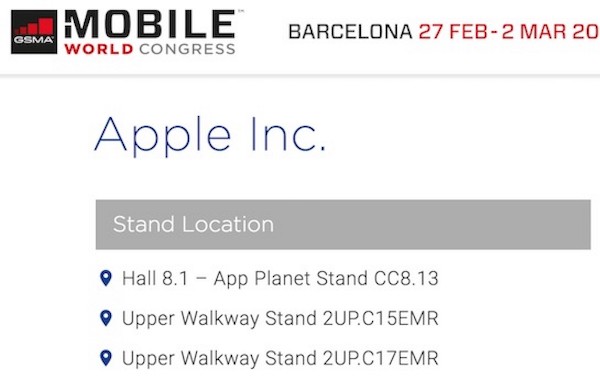