When you think of Apple, you may instantly think of the iPhone, iPad or the Mac. Alternatively, you may even think of Steve Jobs who co-founded the company, or conjure up instant images of the company’s iTunes software. Certain individuals will instantly make references between Apple and the environment, focusing on the company’s unwavering desire to become as an environmentally friendly company as possible. The Cupertino-based company is unapologetically outspoken about the lengths it goes to for helping the environment, and now, in this latest move, it looks as though retail Apple Store outlets will begin transitioning away from plastic bags in an effort to further improve on the company’s environmental responsibilities.

Apple’s focus on helping the environment and wanting to be seen as a “green” company is pretty unique in the tech world. It was only during last month’s “Let us loop you in” event that Tim Cook took the opportunity to introduce a number of new initiatives and steps that the company is taking to help the environment. Those announcements even preceded any introduction of any new products or services.

It now looks as though the environmental focus will be pushed onto the retail front following the leak of internal note sent out to employees and gotten hold of by 9to5Mac, confirming that the iconic plastic drawstring bag will be phased out in favor of a paper bag. All who have purchased a product from a retail Apple Store outlet anywhere in the world, will be familiar with the plain white plastic drawstring bags that contain nothing more than the Apple logo.

As of April 15th it looks as though those bags will be phased out of production, and will be replaced with a paper bag that is made from 80-percent recycled materials. The internal memo also raises a couple of additional points, including telling employees and store managers to first use up existing stocks of plastic bags before moving across to offering paper as a sole option. Customer facing employees have also been told to explicitly ask if the consumer actually needs a bag as part of an effort to minimize the number of bags being issued. 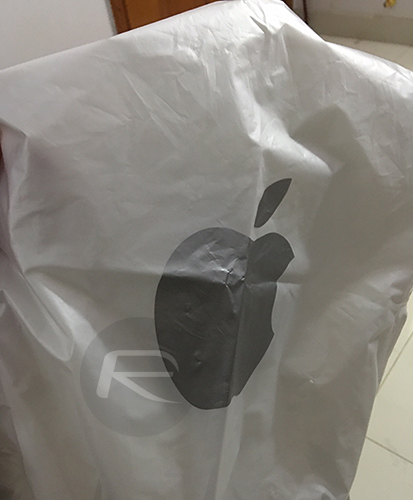 This change won’t exactly come as a surprise for consumers living in the United Kingdom. Shoppers in the UK now have to pay a £0.05p charge on each plastic carrier bag issued at checkout by a company that has an employee based over a specific level. Same goes for Apple Stores in California as well.

Apple has also changed up the Apple Renew gift cards being issued to customers renewing their iPhone by giving in their old iPhone for recycling. The cards are made of recycled paper. More so, Lisa Jackson, Apple’s VP of Environment, Policy, and Social Initiatives, has also hinted earlier that Apple will ultimately move all its packaging to utilize paper based materials.