Apple Starts Free MacBook GPU Repair Program, Find Out If Yours Is Eligible

If you happen to be in the possession of a MacBook Pro – bought between 2011 and early 2013 – and are experiencing graphics related issues on your machine, Apple is offering a free repair program for all affected users starting today. Head on over the jump for further details.

Quite a few 2011 – and early 2013 – MacBook Pro owners have complained about screen-tearing issues as well as the appearance of display artifacts on their panels, a problem that seems to be centered around the AMD GPU. The issue not only went hot on the Apple Support forums, but resulted into a lawsuit being filed against the Cupertino based company citing that the AMD GPU in the machines was facing problems due to lead-free soldering which was causing short-circuiting and other related issues.

Apple is offering two modes of availing this offer for all affected users, by bringing in your machine to an Apple Retail Store or Apple Authorized Service Provider, or users can simply “Call Apple and request a postage paid box to send your MacBook Pro to the local Apple Repair Center.” Apple being Apple, is also offering a refund to customers who have already paid for repairs made in relevance to this issue and will be contacted soon, though it is advised you call the company up to speed up the process. 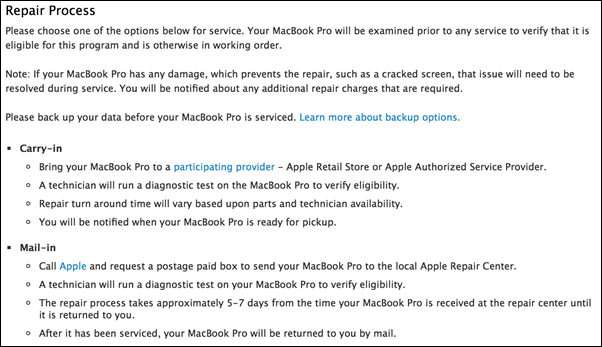 Apple is not new to rolling out such offers, where a similar issue started appearing on the mid-2011 iMacs as well back in 2013, which involved machines with a dedicated GPU. Some iPhone 5 models were proven to have some shady batteries after the phones were debuted, and Apple offered free battery replacements to affected users in that case too.

If you’re affected by graphics related issue on your MacBook Pro, then head over to the source link below for more details.