Apple found itself as the number one company in the world in terms of the number of phones it was able to ship in the fourth quarter of 202o. Apple managed a record fourth quarter, shipping almost 82 million iPhones.

The second spot was taken by Samsung with a relatively modest 62 million units shipped.

That gave the company a market share of 17%, some way behind Apple’s 23%. Xiaomi was in third with 43.4 million units and 12% of the market share, according to Canalys research.

“The iPhone 12 is a hit,” said Canalys Analyst Vincent Thielke. “Apple is better positioned than its competitors on 5G, being heavily skewed towards developed markets, and mobile operator sales channels. But it also made savvy moves behind the scenes to propel its sales and profitability. The omission of a power plug from the ‌iPhone‌ retail box, which reduces weight and size, is making logistics significantly more efficient, amid the ongoing high cost of air freight due to the pandemic.”

In total there were 359.6 million phones shipped last year, a number that represented a 2% reduction on the same period the previous year. 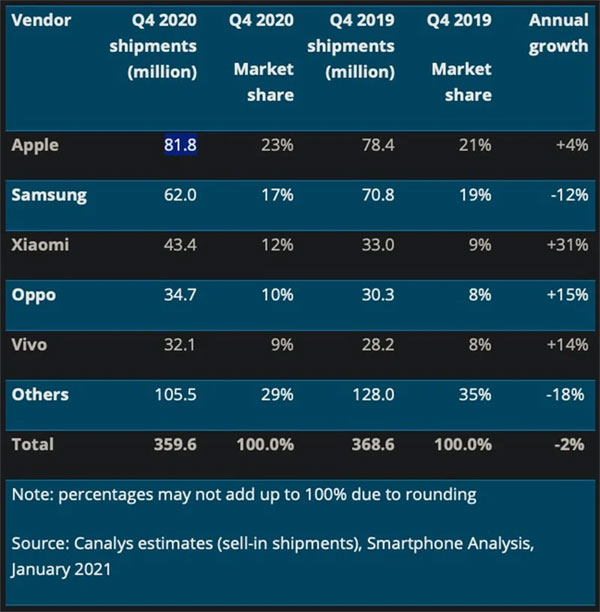 Apple recently announced that it had experienced a bumper first quarter of fiscal year 2021 as well, suggesting that things could look similarly favorably come the next round of results, too.